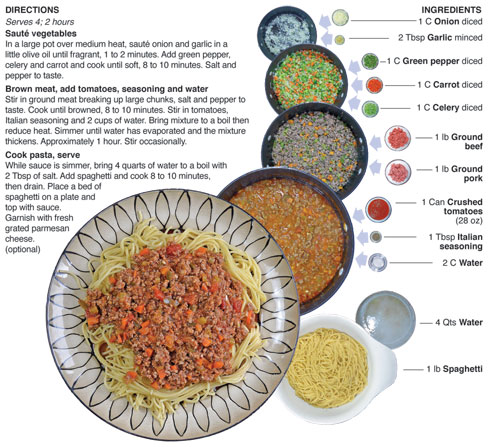 My Aunt makes a sauce known in our family as “meaty spaghetti sauce.” It’s  base is ground beef and goes on pasta – just as the name suggests.

In the culinary world it’s actually known as a ragu or bolognese (pronounced boh-loh-NYEH-zeh) sauce which is based on ground or minced meat and contains root vegetables like onion, celery, carrot and garlic. It is also common to include tomatoes, peppers, cream, broth and herbs for seasoning. It’s all cooked down into a thick and rich sauce made delicious from a long simmer.

The sauce originated in Bologna region of Italy and is known throughout the world as bolognese. The irony is that in Bologna the sauce is not called bolognese, instead it’s called ragu – which is what bolognese really is.

In other words, bolognese is a ragu from Bolgna!

For this recipe, I make my own version of “bolognese,” or “ragu,” or better yet, I’ll stick with my Aunt on this one and call it what my family does – a “meaty spaghetti sauce.” 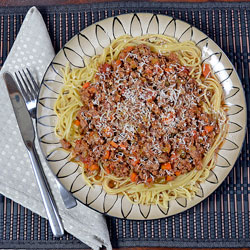 BEHIND THIS BITE
Food says so much about people, in a way, it is an extension of our creativity. My 11 year-old niece has been making salads for a couple of years now and they always turn out looking like an elementary school art project, which is no surprise because hat is her favorite subject at school.
The meaty spaghetti sauce my aunt makes is not only good but it’s very much my aunt. I told her that it was really called bolognese and she said “I don’t care what it’s called, I like my spaghetti sauce really meaty and that’s what it is to me.” Forget the technical stuff. That’s what she likes and that’s what matters.

She not only has her own name for bolognese, she also has names for the younger generation in our family. She recently referred to my sister as a “zany little critter.” When she is asking about what plans I might have for the weekend. She often asks “What are you honyocks planning?”

Honyocks, zany little critters and meaty spaghetti sauce – little things that will always remind me of my Aunt Roxie.