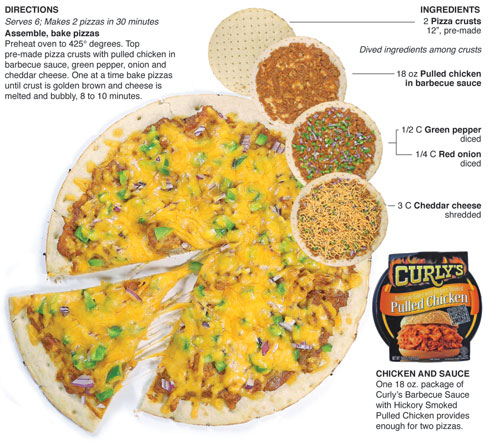 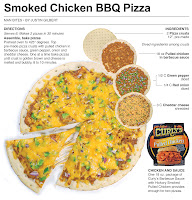 I recently discovered a new brand at the grocery store called Curly’s. They make a variety of smoked meat products including beef, pork and chicken that have been pulled (rather than shredded) and mixed with their own barbecue sauce.

The company has been a food supplier since 1988 and have built a reputation for quality pit smoked barbecue. I generally don’t like products like this and prefer the challenge of making it on my own, but I gave Curly’s chicken a try recently and I was impressed. The chicken had great smoky flavor and the sauce was better than most found on store shelves. I’m sure it would be great in a sandwich, but as soon as I saw it in the meat cooler I knew it was destined for another purpose.

For this recipe, I use Curly’s Barbecue Sauce with Hickory Smoked Pulled Chicken as the meat and sauce of a gourmet pizza. Considering the amount of time it would take to make the smoked chicken from scratch, Curly’s is well worth a try and the results are delicious. 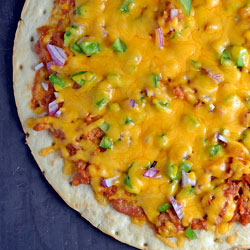 BEHIND THIS BITE
I usually don’t get to cook on charcoal until much later in the spring, but this year mother nature brought us a record-breaking heat wave for the opening weekend of the NCAA basketball tournament. It was a small slice of heaven for me because I am a sports nut and a grill master. I watched hours of fierce competition and grilled pound after pound of animal flesh. The only thing that could have made the weekend better was if the Miller Brewing Company would have sent me a truck full of free Miller Lite.

One of the items I made on the grill this weekend was smoked chicken. It is inspired by Curly’s. I want my own version of smoked pulled chicken in BBQ sauce to put on pizzas or stuff into sandwiches.

The smoked chicken I made on the grill was rich in smoke flavor but a little over cooked - or at least a little dryer than what I usually like it. Next time I’ll get it just right - Then I’ll start on the BBQ sauce to smother it in.

Look for the recipe here soon.