A Toasted Italian Sub, or Grinder 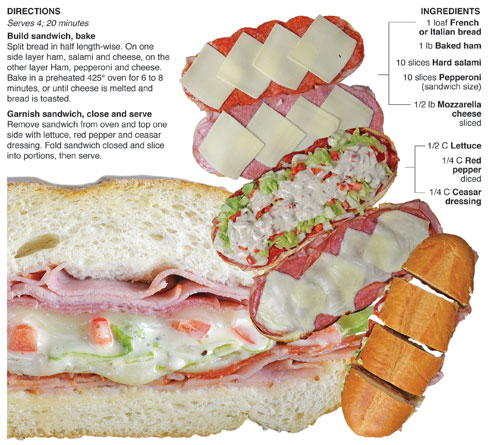 I was half way through finishing lunch at Brevins Restaurant in Churubusco, Indiana and I was almost done dissecting my sandwich. I knew I could remake it – the mystery was the sauce. I thought it might be a special in-house recipe. To my surprise, I asked the waitress and she said it was ceaser dressing.

I should have known, it was a common, but not always utilized classic dressing.

For this recipe, I recreate the Brevin’s grinder, it may not be exact, but it’s pretty close. It has been on their menu for some time now, but as I ate there last week to escape the heat, I decided I had to try and make it. Here’s the catch. I made it a point to buy everything for this recipe at once. All together, it cost $22 to make this, and it will serve four. The same amount (2 orders) at Brevins will cost around $16 – and they make it, bring it to you and do the dishes!

The meat is the real expense here. A restaurant has the resources to buy in bulk and can make an item like this affordable to the public and still profit. 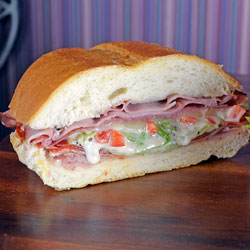 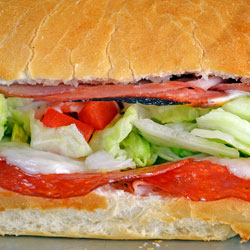 BEHIND THIS BITE
Since moving back to Indiana, I have eaten the grinder at Brevins a number of times. I have to say it is the king of toasted subs, which seem to be all the rage nowadays, with Jimmy Jones, Subway and all the other shops toasting up their samis.

I went to Brevins last week to get away from the scorching heat. The last few recipes have been influenced by the hot weather and this sandwich is a prime example. I wouldn't have stopped and ate Brevins for lunch had I not been craving an air conditioned seat at a place that would bring me food. Seriously, I am not inspired to cook in this weather. I still do it, but stopping at a sit-down restaurant was just the treat I needed. As I ate the yummy sandwich I knew what I wanted to get to work on for my next recipe ... recreating the lunch I was enjoying at the time!

What impresses me most about this sandwich is the ceasar dressing. I use a lot of ranch on things, sometimes Italian and blue cheese dressing, but I had never thought to use ceasar, generally because I don’t buy it. The dressing adds a creamy, savory flavor and it really compliments the salami and pepperoni here.

Since I made this, I have used ceasar on two other sandwiches I have made, one of which will be a post here in the near future. It’s my new secret sauce  – at least until the bottle runs out.