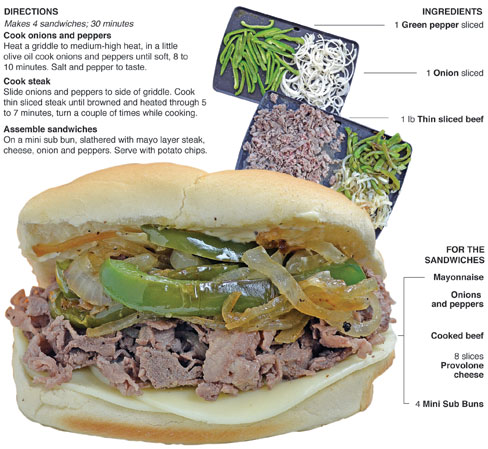 I was recently at Walmart taking pictures in hopes of getting one published on thepeopleofwalmart.com, when I noticed Thin Sliced Beef in the freezer section. Since I was having no luck finding a human freak dressed like a hooker in the Bronx, I decided to buy a box and try it out.

The beef comes in thin patties that are shaped like ribeye steaks. They’re made to be cooked right out of the freezer, effectively steaming the meat as it thaws in the skillet. After cooking a couple of minutes on each side, all it takes is a spatula to separate the patties into the thinly slices pieces of beef.

I found that they need a bit of seasoning but all-in-all it’s a decent and quick lunch. I made this recipe using an entire box of Great Value (Walmart brand) thin sliced steak. Obviously, thin sliced ribeye from grass-fed organic beef would have made this sandwich superior, but for a tasty sandwich on a Friday night when budget is a factor, this stuff really does the trick. 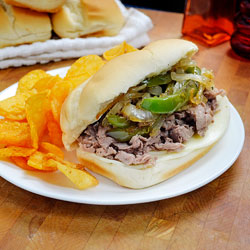 BEHIND THIS BITE
I made this in the evening a few days ago. I had put off making it for 2 days because it was in the middle of the hottest four-day stretch in the recorded history of Fort Wayne’s weather. Four straight days over 100 degrees! When it is that hot, cooking is just not something I want to do – indoors or out.

My aspirations during that intense heat wave was to stay as cool and as motionless as possible. When the climate in northern Indiana feels like the inside of an Easy-bake oven, I’m prone to giving up all physical activity when the weather becomes that oppressive.

I can’t imagine what those poor souls digging ditches for $12 an hour were thinking.
If that were my job, I’m sure suicide would be part of what I’m contemplating at 2:30 p.m. when its 105°. Especially, if what I'm digging is an $8 million renovation for a well connected business owner who's perverse idea of "trickle-down" economics means you're digging a hole for chump change.

ANYWAY, I knew I had to get the recipe documented, so I declined an invite to eat with my Mom and Dad at an air conditioned restaurant and fired up the griddle out on the porch to cook it. It was all I could do to keep the sweat off the hot plate, but I got it done and enjoyed two of these samis in the cool air conditioning of my office as I reviewed the pictures from the shoot.

It might have been Walmart meat from a box - but it was tasty.