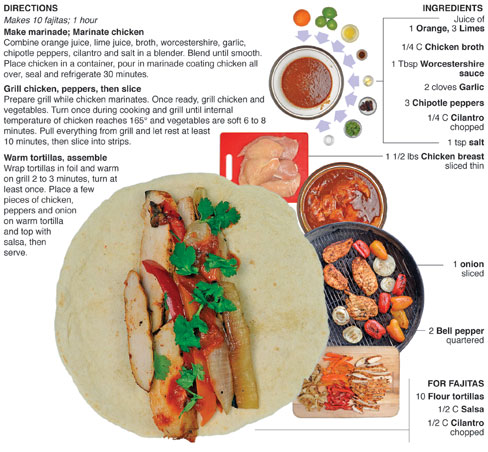 Using the oven during hot summer days is about the same as running the furnace – it just adds to the inferno. Last week when we tied our hottest day ever at 106° I thought running the oven might not only feel like turning on the heat but would actually cause people to suffocate.

During the dog days of summer it’s always good to have a meal or two that can be made quickly and entirely outside on the grill. It still takes a tough cook to stand next to the fire in the scorching heat, but the payoff comes on the first step back into the air conditioned house when the cool air hits like a mist of ice water sprayed on the skin.

For this recipe, I make fajitas on the grill and all the cooking is done outside. It starts with a citrus based marinade for     chicken that is thin sliced for quicker cooking. Onion and bell peppers cook beside the chicken and are the vegetables for the meal. Wrap them in a tortilla with some favorite salsa and the result is a yummy meal without having to run the oven indoors. 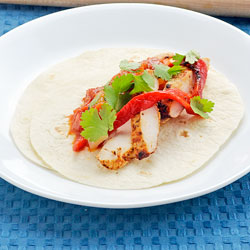 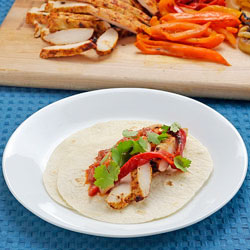 The heat has been insane in 2012. An early summer arrived in the Midwest back in March and it has been unseasonably warm and dry ever since. I haven't minded the dry heat during the day, because the nights cool down 30 or 40 degrees. It's almost like living in the desert. Up until the middle of June, the weather was absolutely perfect to go camping.

All that changed with a ban on open fires because the dryness has turned to severe drought and the daily highs have been close to 100°. Thank goodness that it’s still ok to grill outside because, like I said in the introduction, it’s unthinkable to want to run the oven inside the house. It negates the air conditioning and you end up sweating while eating.

I’m really hoping that we get some good rain and a little break from the heat. First, because the plants and gardens are really suffering and second, so I can have me some camp fires at the family camp ground! It’s hard to go camping and not have a fire. It’s like going to the movies and they only show previews.