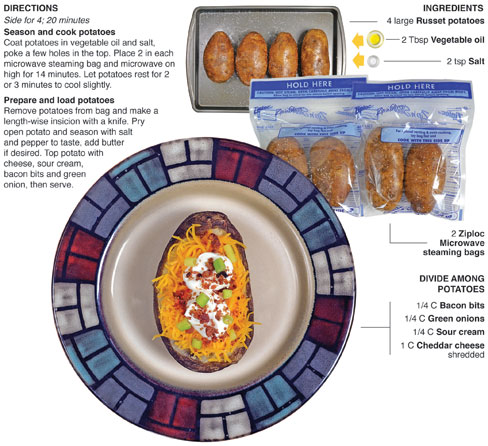 My mom is a twelve degree black belt in cooking with radiation, or what I like to call a microwave ninja. She mastered the art of 30-minute meals long before anyone had heard of Rachael Ray and one of the main appliances she uses is the microwave – mostly for side dishes like pasta and vegetables.

In my opinion, the most impressive thing she makes in the microwave is potatoes – baked or mashed. Potatoes are really ideal. The microwave uses radiation to heat water molecules, effectively steaming things from the inside out, which is a great way to prepare a potato. Using ziploc microwave steaming bags, which are available at nearly every grocery store, a baked potato can be on the plate in 20 minutes, which is what I create for this recipe.

With the hottest part of the summer looming, this is a great dish to accompany steaks from the grill, just start the potatoes right before putting the steaks on and they should be finished just in time to slice into the meat. 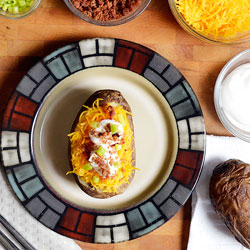 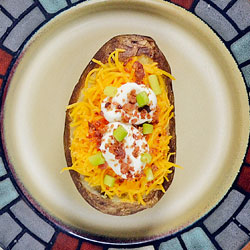 I have been wanting to make this recipe for my column for nearly two years. I was staying at the family campground and I scribbled “My mom is a microwave ninja” in my notebook. That’s all it took to inspire an entire recipe – a crazy, miller-lite-fueled quote.

It is 100 percent the truth, and my Mom has a million tricks for putting dinner on the table.

She comes from a long line of great cooks that felt it was their duty to put dinner on the table every night. She has carried on that tradition even though she works full-time. My Dad cooks too, and can put dinner on the table as well, but Mom makes dinner HER burden. She really likes to provide for the family, and dinner has always been her way of doing that on a regular basis.

It's her daily family devotion.

My Mom and Dad’s generation, or the Baby Boomers, ushered in a great change with the American family. Unlike anything that planet Earth has ever experienced, the majority of women in America began to share the family financial burden. Which is the equivalent of defending the nest in a capitalistic society.

This created a new dynamic in the family life of men and women.

The catalysts for this change was World War II.  The feminist movement started long before the war, but it created the conditions for the movement to take hold.

When the Untied States entered World War II, the men went off to fight and the women worked to build the war machine – while still caring for the family. When the men returned, America women weren't completely willing to go back to the way things were. They proved that they were capable of more than just being mothers at home and started their own revolution. For the most part, that revolution was carried out by their daughters – The women of the Baby Boom.

The revolt continues for women, but in the last 60 years, American women have completely changed – and proven – that females on this planet are just as capable as any male.

Today, if one parent’s job is to stay home, raise the kids and make sure everyone is fed, then that family is truly blessed. Full-time home makers, whether it be a man or a woman, are harder and harder to find and a rare breed to say the least.

This recipe is an innovation that my Mom uses to make sure that she can put dinner on the counter each night after a day of work. (Mom and Dad eat in front of the TV, so it would be wrong to say table) Mom does this because she wants to, not because she is supposed to, or has to, but because of the satisfaction she gets from cooking for the people she loves the most.