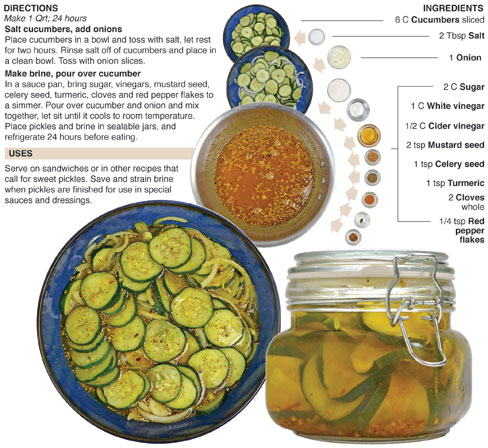 Cucumbers have begun to pile up on kitchen counters like dirty dishes at a frat house. It’s just part of the first wave of bounty surrendered by home gardens. A cucumber is delicious in a number of dishes but for most gardeners there are to many to eat all of them fresh. A great way to preserve them is by pickling, a preservation technique that dates to ancient Mesopotamia.

There are several different ways to pickle, but according to the Encyclopedia of American Food and Drink, sweet pickles in the Untied States took off with German immigrants known as the “Pennsylvania Dutch” who settled the countryside near Philadelphia in the early 1700s. They practiced Mennonite traditions which featured cooking that relied heavily on sweet and sour flavor combinations.

For this recipe, I make sweet pickles known as “bread and butter.” The name is said to have originated two ways - either for their compatibility with bread and butter, or for the income they brought in. 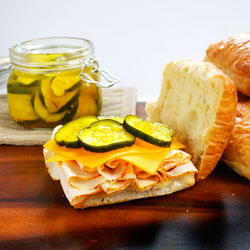 BEHIND THIS BITE
I’ve been wanting to make bread and butter pickles for a while now, I just had to wait for cucumbers to be in season. In my family, everyone who has a garden grows them, so I knew they would be available in abundance if I just waited until the right time. Last week my brother-in-law sent a mess home with Mom which I saw as my cue.

I love bread and butter pickles more for the brine than the actual pickles themselves. I can literally drink it. The sweet and sour flavor of the juice is an amazing ingredient to add to mayo and other dressings. It’s the secret to the sauce for the Ranch BLT Dog and the New York Club Pizza, two delicious recipes that have appeared here in the past. I wanted to make the pickles for myself just to have the home-made brine to use in the future. It has a little extra spice and the flavors are more intense than store-bought pickles. I can’t wait to make a sauce out of it.

Using the brine is a little tip I picked up from Cuisine at Home magazine. I used to make two or three recipes out of every issue and would follow them exactly. Doing that taught me so much about cooking. I think it’s important for new cooks to follow recipes exactly the first time it's tried, just for the learning experience. It’s almost like taking a class from a chef and a great way to discover flavor combinations and classic techniques. I still subscribe and read Cuisine at Home, mostly now for inspiration, but I have to admit there are times where I see one of their creations and I will create it, following the recipe to the tee, just so I can taste what the developer had intended for me to actually taste.