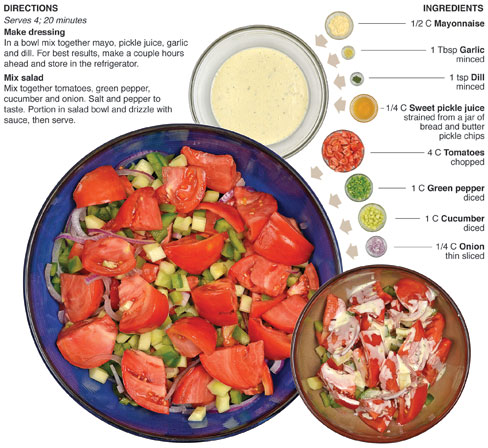 Fresh tomatoes from the garden are completely superior in flavor to what we buy at the super market most of the year. Commercially produced tomatoes are picked as far as two weeks ahead of being ripe, when the product is green in color and hard and firm in texture. This helps to prevent bruising and damage during the shipping process. Once the tomatoes get near their destination they are left on shelves in cold storage for as long as a month. Before hitting the super market they are put in a gas chamber and exposed to ethylene which artificially creates the red color and induces ripeness. The bottom line is that most store-bought tomatoes are picked to soon which is why they are loaded with moisture and watered down in flavor.

For this recipe, I use delicious vine ripe tomatoes that are grown where they are eaten. The tomato stars in a salad of garden fresh vegetables drizzled with a homemade dressing that includes brine from fresh sweet pickles I made last week. 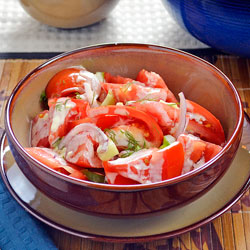 BEHIND THIS BITE
Back in February I entered a chili cook off sponsored by the American Legion Riders. Instead of using the flavorless tomatoes on the shelf at Kroger, I bought heirloom tomatoes and the taste difference was unbelievable. It really is a shame how most store-bought tomatoes lack taste. I wish that I lived somewhere that they could be grown year round because I use tomatoes a lot, and I’m not always willing to fork out the $2 extra per pound for the heirloom variety.

I don’t have to worry about that right now because it’s tomato time in the midwest, and it will be for the next month or so. The only thing I have to worry about with tomatoes this time of year is the crop that goes to waste and lays in the garden rotting away. Chances are good that if that rotten tomato is found by a teenage boy he will probably fling it at a passing car or take it with him to pelt some younger kid in the neighborhood. Beware of flying rotten tomatoes.