The idea for a post like this originated last March. I wanted to take a large and tough cut of meat, season it with a rub and cook it in a slow cooker. I would then take the meat and do different things with it like the taco and slider presented here. Because of an ingredient mix up, my initial try turned out disastrous and then summer came in March. We had a week of record high temperatures in Northern Indiana and the weather never turned cold again, so a crock-pot meal was kind of forgotten about.

Fall has arrived and I thought I would give the crock-pot meal another try and I'm pleased to report that this recipe turned out even better than expected. The brown sugar was the perfect balance for the chipotle chili powder in the rub. (I used McCormicks brand which can be a bit spicy.)

I would have been perfectly happy eating this beef beside some potatoes and carrots, but I didn’t plan for that when I initially started. I wish I would have because the beef was great by itself. I did have a nice pig-out session after I shredded the beef though, it was a greasy, use-your-fingers kind of pig-out. I really couldn’t resist with two pounds of succulent fall apart meat in front of me.

Either the sliders or tacos are a perfect way to deliver this tasty crock-pot beef. The tacos could probably feed a family of six by themselves. But the idea was to make something that a lot of people could eat - I planned it as a football party snack, and that was accomplished. 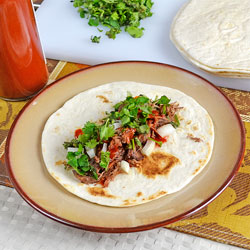 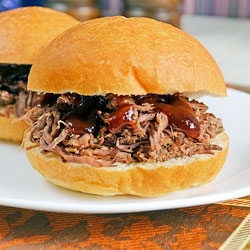 As I said in the beginning, I initially tried this type of crock-pot recipe back in early March. In that test I used pork shoulder. The problem arose when I grabbed the wrong bottle of chili powder when making the rub. I noticed the bright red color of the powder when I measured it out, but I didn't know until tasting the final product that I had grabbed a bottle of cayenne instead of regular chili powder. Sometime ago I used an empty bottle of chili powder to consolidate three or four half filled bottles of cayenne pepper – that's the bottle I grabbed. The end result was an extremely hot shredded pork. I basically seasoned three pounds of pork with a rub the featured two heaping tablespoons of cayenne pepper and there was nothing else in the rub to counter balance the heat. It was not inedible, but to much of the pork would have ended up creating fire in the hole. (If you know what I mean)

I made sure I double checked all of my spices before putting them into the rub this time and I'm glad I did because this cut turned out delicious.

Sear roast, cook in slow cooker, shred
In a cast iron pan over high heat, sear roast on all sides until a dark brown crust forms. Place in slow cooker with beef broth and cook on high for 4 hours or until roast easily tears apart with a fork. Remove to a bowl and shred entire roast with forks.

Assemble
On a dinner roll cut in half, pile beef, add barbecue sauce and top half of roll.

Warm, assemble
Warm tor ill as in microwave or oven until heated tortillas through. On warm tortilla layer, shredded beef, salsa picante, onion and cilantro. Fold and
serve.
Posted by behindthebites@gmail.com at 6:56 PM

This was the best shedded beef/pot roast recipe I have found! I add a touch of Sriracha as well, and it is AWESOME in the tacos.