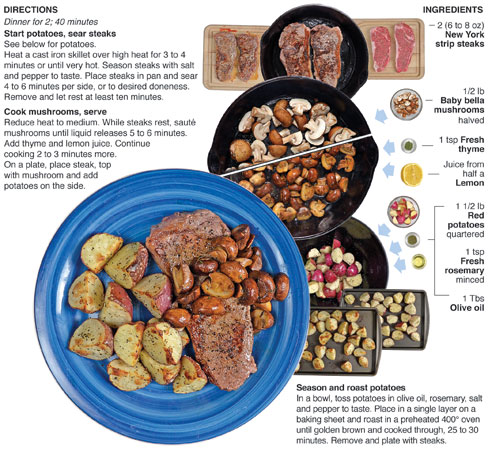 The casting of iron started in China in the year 513 B.C. but the technology did not make it to Europe until 1100 A.D. Years later, large cast iron cauldrons began to appear that could be hung over a fire or in a hearth and used for cooking. By the 1800s stoves, pans, and all sorts of cast iron cookware was being produced. Large cast iron pots were essential to pioneers settling the western United States because of their versatility and ease of travel.

For this recipe, I make a steak dinner using one of my cast iron skillets. Five years ago, my last remaining grand parent passed away and I was given her collection of cast iron skillets. The set had been passed to her from her mother. Their exact age is not known but they are my prize kitchen possessions.

Cast iron is an ideal choice for cooking steaks. They distribute heat evenly over their surfaces and are great for searing, which creates a flavorful crust on the surface and seals in juices. This helps make every bite a delicious and succulent treat. 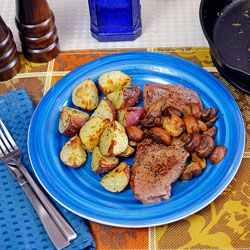 BEHIND THIS BITE
This recipe is not so much about the food as it is about using my cast iron. As I mention in the introduction, they are my prized kitchen possessions, I've been looking forward to the cool weather and cooking more indoors - using the cast iron is one of the reasons. They always remind my of my Grandma Frieda, she was a smart lady who loved her gandkids. I hope that I can one day pass these pots on to some of my own. (Finding a wife to have kids with might be a good start to that though.)

This meal is really simple, I use fresh herbs in the side dishes to punch up flavor. The steak is as minimal as it gets, and that is how I prefer a tender cut - salt, pepper and cooked perfectly. A great cut of steak needs no rub or marinade.

Season and roast potatoes
In a bowl, toss potatoes in olive oil, rosemary, salt and pepper to taste. Place in a single layer on a baking sheet and roast in a preheated 400° oven until golden brown and cooked through, 25 to 30 minutes. Remove and plate with steaks.

Sear steaks
While potatoes roast, heat a cast iron skillet over high heat for 3 to 4 minutes or until very hot. Season steaks with salt and pepper to taste. Place steaks in pan and sear 4 to 6 minutes per side, or to desired doneness. Remove and let rest at least ten minutes.

Cook mushrooms, serve
Reduce heat to medium. While steaks rest, sauté mushrooms until liquid releases 5 to 6 minutes. Add thyme and lemon juice. Continue cooking 2 to 3 minutes more. On a plate, place steak, top with mushroom and add potatoes on the side.
Posted by behindthebites@gmail.com at 12:54 PM