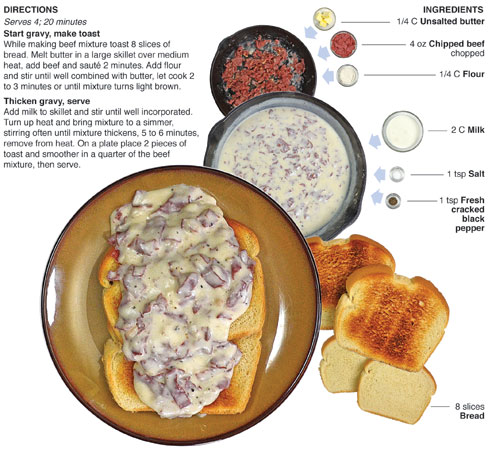 Chipped beef is made from top and bottom round, sirloin tip and knuckle. The cuts are brined, dried and sliced thin or “chipped.” The products resistance to decay and lightweight make it the perfect product for soldiers. In World War II the beef was used as the main ingredient of a cream gravy to smother toasted bread so often that the soldiers gave it a very raw nickname: Shit on a shingle.

For years, My family ate creamed beef over toast and I had no idea of it’s naughty nickname. It was always a brunch favorite in our house. Recently my Mom shared a left over batch with me that Dad had made. I thought it would be a simple dish to recreate here and as I was describing the dish, and it’s deliciousness, to my cousin a few days later, she said, “You made shit on a shingle for your blog?” I had heard the slang term years ago but I really had no idea that creamed beef over toast is the infamous dish that's name translates to “poop on a roof.” 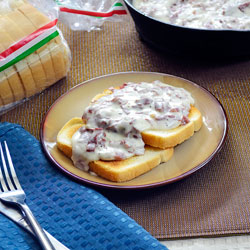 BEHIND THIS BITE
The introduction says it all.

Thicken gravy, serve
Add milk to skillet and stir until well incorporated. Turn up heat and bring mixture to a simmer, stirring often until mixture thickens, 5 to 6 minutes, remove from heat. On a plate place 2 pieces of toast and smoother in a quarter of the beef mixture, then serve.
Posted by behindthebites@gmail.com

Email ThisBlogThis!Share to TwitterShare to FacebookShare to Pinterest
Labels: beef, breakfast, shit on a shingle