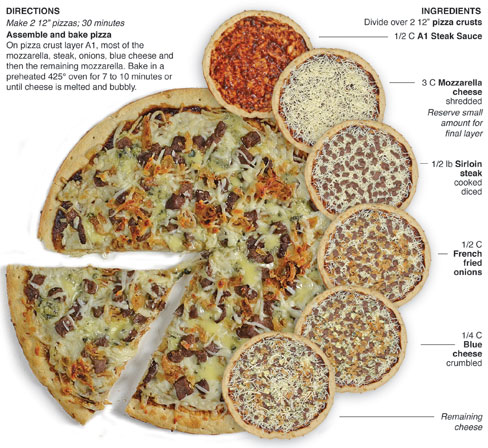 A little over a year ago, Carl's Jr and Hardee’s presented their Steakhouse Thickburger to the world, complete with an ad that featured a hamburger god and scantily clad goddesses. It followed a tradition in advertising for the fast food restaurant chain that is designed to attract guys 18 to 34 years old - or guys that like to see hot chicks in skimpy outfits - which is most guys in general.

After speeding to Hardee’s and trying the sandwich, I recreated it here at Behind the Bites. I thought it was a real home run for man burgers.

The burger featured lots of complimentary flavors that could easily be transferred to a pizza, and that is what I have done here.

I use A1 as the sauce which goes well with the steak, but it’s the perfect compliment to the tangy blue cheese. For texture and a slightly sweet flavor, french fried onions are added and everything is bound together with mozzarella cheese.

For the steak, I diced up some thin-sliced sirloin tip before cooking it. This helped tenderize the little chunks and help retain all their moisture after being cooked – none was lost do to slicing. With all of the great flavors working together the steak still shines through as the star of this pie. 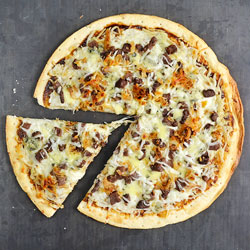 BEHIND THIS BITE
I have cooked this pizza a few times in the last year and each time something went wrong which prevented me from being able to document and post what I cooked.

The first time I did this I was using a new camera, the exposures were all completely different and could have been classified as a food-photography disaster.

The second time, which I did a few months later I piled on the ingredients and it really ruined it. I used ground beef instead of steak and it made the pie greasy. Not only was there to much ground beef but there was to much everything. The thin crust I used didn’t hold up and the entire pie could have been classified as a pizza-making disaster.

All this lead to my third attempt, which is what is contained in this post. I got the exposure right, switched to actual steak and was happy with the ingredient amounts. The pizza was delicious and I couldn’t stop eating it. Before I knew it I had eat all but one slice of an entire pie which could have been classified as a healthy-eating disaster.

Assemble and bake pizza
On pizza crust layer A1, most of the mozzarella, steak, onions, blue cheese and then the remaining mozzarella. Bake in a preheated 425° oven for 7 to 10 minutes or until cheese is melted and bubbly.
Posted by behindthebites@gmail.com at 1:12 PM