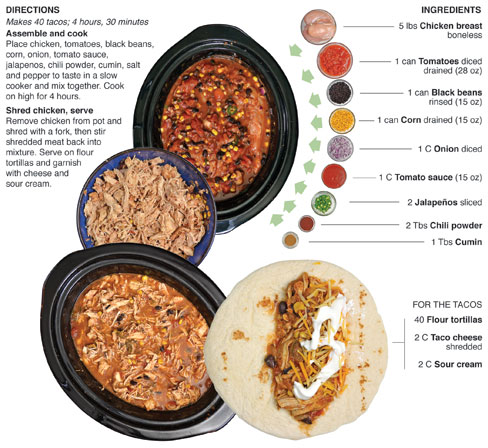 During the holidays, most of us attend multiple gatherings. Chances are at least one of those parties will be a potluck dinner. The first time I made a dish for a potluck was during my first Christmas living in New York City. My department at the Associated Press had a holiday gathering. I decided to make nacho dip.

I started with taco meat, then added cheese. I should have stopped at that point but I kept adding things. By the time I was finished it contained a number of ingredients including black olives and shredded lettuce. I thought it tasted good, but it looked like yellow-grey cottage cheese with random chunks throughout. It was more of a goop than a dip.

I took it to the party and the only person to try it was the one known as “the crazy old man” in the editorial art department.

My culinary skills have improved since then and for this recipe, I create a potluck dish made in a slow cooker. It’s a spicy shredded chicken mix that can be filling in a soft taco or eaten alone like a chili. 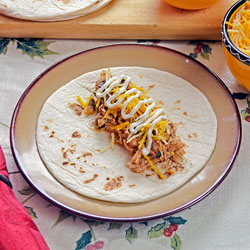 BEHIND THIS BITE
I made these for the first of many Christmas parties this year. They went over well and I actually had some leftovers that made for a couple of tasty lunches. I really like this kind of cooking – throw it all in a pot and let it go. These kind of recipes are perfect for the holidays. While it cooks all gift wrapping and even a couple other dishes can can be made just in time it to be ready for the party.

I really love crock pot tacos. A modest amount of meat combined with a few other ingredients can go a long way.

These were perfect for the party. There were two different nacho dips placed right beside them. It wasn’t long before I saw a couple of guys smother their tacos in the nacho dip, completely ignoring the sour cream and shredded cheese intended as the garnish. It doesn’t take long for a couple of hungry dudes to get inventive at a potluck – especially when there's beer around.

Shred chicken, serve
Remove chicken from pot and shred with a fork, then stir shredded meat back into mixture. Serve on flour tortillas and garnish with cheese and sour cream.
Posted by behindthebites@gmail.com

I would LOVE to make these delicious looking tacos, but there are only two of us. I suffer pitifully from an inability to do cooking conversations. Would you help a fella out? Thanks so much!

Freeze the rest in 1 cup portions. You can take one out or more for another meal or if you want one for a late night snack there you go! Wonderful! Look at all the work you saved by big batching it