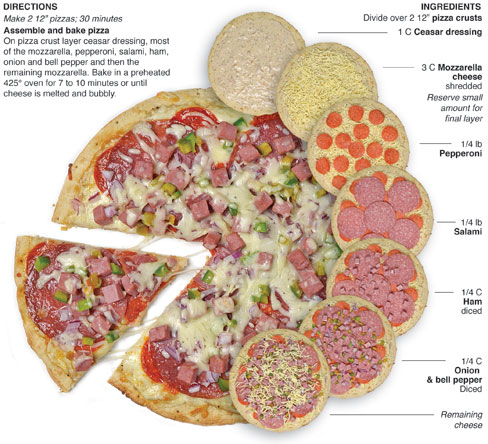 I was at the store recently and I noticed a package of salami in the cold meats section. In an instant I had a craving for a grinder that features salami, pepperoni and ceasar dressing from a local restaurant named Brevins.

For some reason it occurred to me to try and make a pizza out of the sandwich. The secret to the grinder is the ceasar dressing - it just seems to compliment the cold cuts and adds an extra level of seasoning that literally make your mouth water.

Over the last couple of years I have made a number of gourmet pizzas and it seems as though the sauce, more than any other ingredient, determines the entire flavor profile of the pie. Traditional pizza sauce would have made this a normal meat lovers pizza. The ceasar dressing really changes it and adds a tasty and unique flavor that helps this pie stand out from the usual slice. 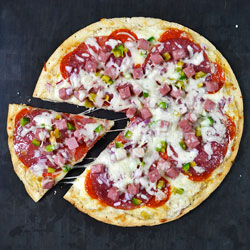 BEHIND THIS BITE
I have to admit that hot ceasar dressing wasn’t as potent as the cool dressing on a sandwich or salad. The flavor is still good, It just didn’t have the punch that it seems to have when used in combination with fresh and crunchy lettuce.

If I were to make this again I would add the dressing and some shredded lettuce after the pie came out of the oven. This would make it more of an open face sandwich. Before doing that though, I think I would just jump in the car and head up to Brevins, the pizza was tasty but there isn't a sandwich, or pizza for that matter, within 20 miles that compares to their grinder!

Assemble and bake pizza
On pizza crust layer ceasar dressing, most of the mozzarella, pepperoni, salami, ham, onion and bell pepper and then the remaining mozzarella. Bake in a preheated 425° oven for 7 to 10 minutes or until cheese is melted and bubbly.
Posted by behindthebites@gmail.com