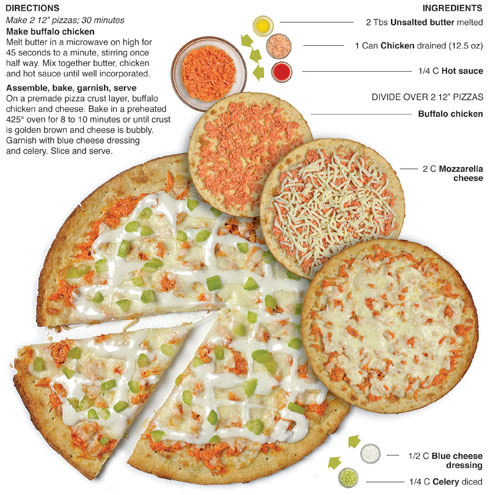 After using the Buffalo Chicken Rub from Williams-Sonoma – and loving the results – I was inspired to create my own buffalo chicken recipe. A large part of the reason I liked the rub so much was that I got all the great buffalo chicken flavors without being covered in sauce or getting an overload of it on my taste buds.

Eliminating the mess was relatively easy, it just requires a delivery method other than bare hands. I decided that a thin pizza crust would be optimal, a sandwich has a top and bottom bun which makes the bread a major element with each bite, a thin crust pizza is more like a cracker or chip and is really just an edible utensil for delivering the toppings.

To eliminate the overload of hot sauce, I toss shredded chicken in the mixture before I put it on the pizza, rather than dump the sauce on the crust like traditional pizza sauce. Blue cheese dressing and celery are added after the pizza comes out of the oven. The end result was one of the best buffalo chicken meals I have ever eaten.

I highly recommend this if you're hosting a Super Bowl party. The guests will love it. 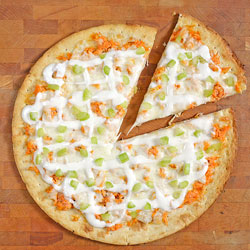 BEHIND THIS BITE
I did a test run of this recipe over at my cousin Jessie’s house. I stopped over to visit her and her husband earlier in the week to catch up and have them critique my new creation. I’m glad I had two pizza crusts and enough ingredients for two pies because my cousin Jessie had a ton of ideas as well, and was bound and determine to take over the pizza making responsibility for the night.

I thought it was so funny, she takes after her late mother and aunt (my mom) so much. They are busy bodies and can hardly stand to see someone doing work without pitching in. Which is great, except, if you let them do to much they end up taking over the process.

Now, when your cleaning the garage, this is a good thing. Ask them for a little help and before you know it they are telling you to get the hell out because all your doing is getting in the way. But when your trying to cook a recipe for your blog — not so much.

While making the pizzas I had to draw the line, I told her I needed to make the first one the way I had planned and the second could be all hers. It worked out well because the pizza I made (this post) worked perfect - a buffalo chicken experience - without the mess. Her pizza was a gourmet chicken pizza and gave me a great idea. But you’ll have to wait for that post in the future.

Make buffalo chicken
Melt butter in a microwave on high for 45 seconds to a minute, stirring once half way. Mix together butter, chicken and hot sauce until well incorporated.

Assemble, bake, garnish, serve
On a pre-made pizza crust layer, buffalo chicken and cheese. Bake in a preheated 425° oven for 8 to 10 minutes or until crust is golden brown and cheese is bubbly. Garnish with blue cheese dressing
and celery. Slice and serve.
Posted by behindthebites@gmail.com at 2:01 PM