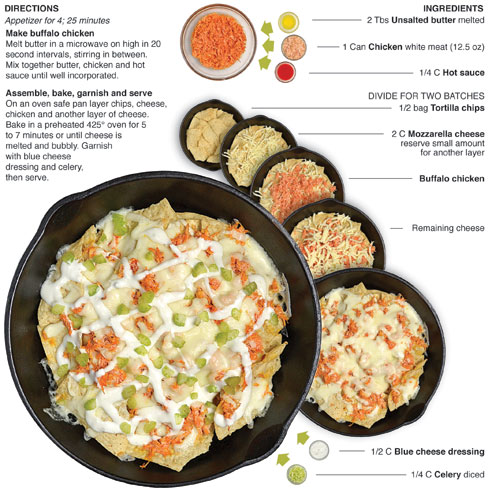 As part of the ultimate buffalo chicken experience I have been posting over the last week, I arrive at one of my favorite all-time snacks.

Buffalo chicken and nachos lend themselves to each other perfectly. Nachos are usually made with seasoned meat and are garnished after being cooked. This same concept is used in buffalo chicken, the garnishes being blue cheese dressing and celery. Plus, nachos and buffalo wings are party classics. I think it's only natural to combine these beer-bash Hall of Famers.

One of the keys to this recipe is tossing the chicken in the hot sauce, rather than dumping the hot sauce on the nachos, it assures the buffalo chicken taste with every bite and, if measured properly, eliminates the buffalo sauce overload - when the acid from the hot sauce accumulates on the taste buds and starts to ruin the experience. 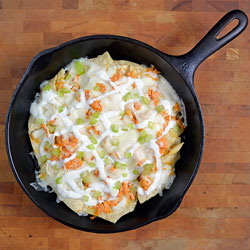 BEHIND THIS BITE
I made both the pizza and nachos at the same time when I documented the two recipes. I preferred the pizza. When I shared the leftovers with my parents. Dad liked the nachos. Both are great gourmet twists and party pleasers.

In the last week, I have made a number of buffalo chicken recipes. I have one more to make - the dip. That will be the finishing touch on my buffalo chicken extravaganza here at the Behind the Bites. I’m going to wait before I make the dip though. I’m little burned out on buffalo chicken. If I have to eat it again in the next couple of days I might go into buffalo chicken overload. I'll wait for the upcoming Championship Sunday when we find out who'll be playing in the Super Bowl.

Make buffalo chicken
Melt butter in a microwave on high in 20 second intervals, stirring in between. Mix together butter, chicken and hot sauce until well incorporated.

Assemble, bake, garnish and serve
On an oven safe pan layer chips, cheese, chicken and another layer of cheese. Bake in a preheated 425° oven for 5 to 7 minutes or until cheese is melted and bubbly. Garnish with blue cheese dressing and celery, then serve.
Posted by behindthebites@gmail.com at 3:39 PM