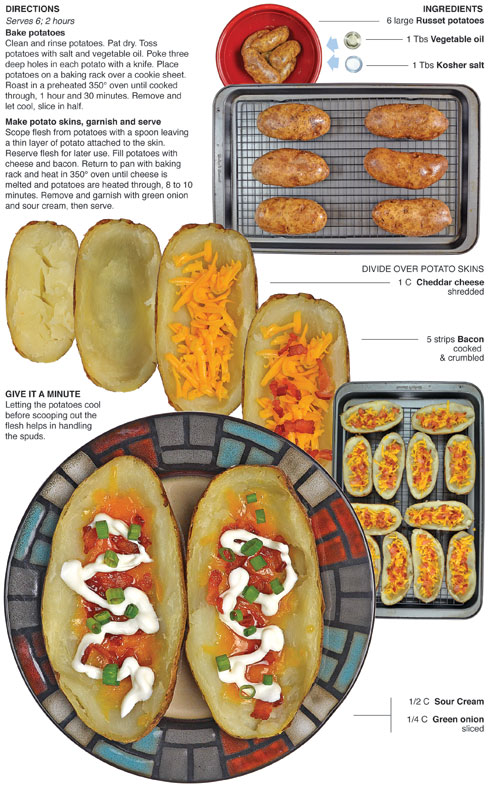 Potato skins remind me of a part-time job I took at the Texas Roadhouse soon after relocating to Indiana in the Summer of 2010. They used leftovers to make them. Baked potato is an item that is not made to order, there has to be large batches prepared ahead of time. The Roadhouse utilizes leftover baked potatoes to make the skins as an appetizer the next day. I’m sure there are many restaurant that do this, but, I thought it was an interesting fact. That little tid bit has stuck with me long enough for me to mentally regurgitate it here.

A typical order came with cheese, bacon and a side of sour cream. I always took it a step further and would often smother them with chili. Looking back, that was a little overkill, but I would get them after busting my butt waiting tables. It's hard to not be over the top with food after you have served more than a $1,000 worth to customers and not been able to eat one bite.

One of the great benefits about making this recipe at home is that there is plenty of potato leftover, enough to make another potato favorite - which will be featured in my next post. 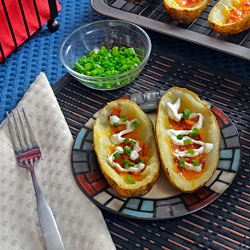 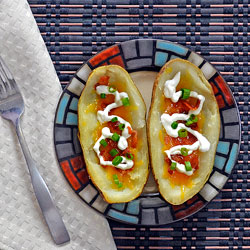 I never thought I would be doing something like waiting tables at a steak house. But, I had been in Fort Wayne for about three months and was really digging my new found spot at a little paper as the Visual Food Columnist, the only problem was that there was no pay. To me, getting the print space was all that mattered.

I had to build a portfolio of work and see if I could sustain it for the long run. In the news business, you have to be able to do your job, when the last thing on your mind is your job, meaning that your work has got to be good when it’s at it’s worst. Generally, you can look at a year’s worth of work and determine if your in the right spot.

In order to save money while I built my portfolio, I took some part time employment with my sister waiting tables. I thought it would be easy, but I will tell anyone this right now – to be a good server at a busy restaurant and make good money – you have to bust your ass!

It took me a couple of months learning the new trade. In the beginning, I totally sucked, I literally had to learn how to carry a tray of drinks.  During that process I drenched a baby with a glass of ice water - true story.

I worked hard and was determined to be good at it before giving up. The work paid off and I did become a good server. I’m proud to say that during the 9 months that I worked at the THR, I was secretly evaluated by customers working for corporate headquarters twice (neither was during the first couple of months thankfully) and both times I received a 100 percent score.

I proved I could sustain my food column and picked up the skills necessary to be a good waiter in the process. That said, I’m glad I don’t have to do that now. I quit waiting tables exactly a year after starting my food column, I could not wait to cash out my last table and I hope that I never have to do that again, but I will if I have to, waiting tables is probably the most lucrative part time job in Fort Wayne. The experience has made me work even harder at making a living as a food columnists - which is still a work in progress.

Bake potatoes
Clean and rinse potatoes. Pat dry. Toss potatoes with salt and vegetable oil. Poke three deep holes in each potato with a knife. Place potatoes on a baking rack over a cookie sheet. Roast in a preheated 350° oven until cooked through, 1 hour and 30 minutes. Remove and let cool, slice in half.

Make potato skins, garnish and serve
Scope flesh from potatoes with a spoon leaving a thin layer of potato attached to the skin. Reserve flesh for later use. Fill potatoes with cheese and bacon. Return to pan with baking rack and heat in 350° oven until cheese is melted and potatoes are heated through, 8 to 10 minutes. Remove and garnish with green onion and sour cream, then serve.
Posted by behindthebites@gmail.com at 2:30 PM