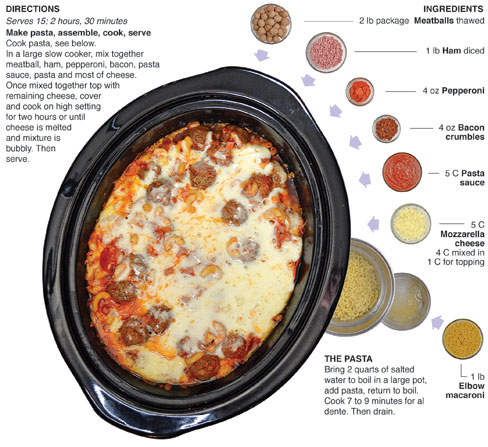 This is a man’s meal.

It's loaded with meat - so much so that I advise any vegetarians to quit reading now - Your head might explode by the end of the next sentence. This casserole contains three and a half pounds of cooked animal flesh and five, yup, FIVE cups of cheese. Not to mention the pound of pasta and quart of sauce.

All said and done I bet there is 90,000 calories in this pot. Enough man fuel to power the Vegas strip on Super Bowl Sunday.

Adding to the Manliness of this casserole - it’s super simple, idiot proof.

All that is needed is to mix this stuff together and hit the cook button. I guess there is one difficult part - making the pasta. Which, to be honest, if that is difficult – like the vegetarians – stop reading this blog now because the recipes on the site will make your head explode.

I served this at a meeting attended by about 20 guys - it went so fast that not everyone there got to try a full helping. If your hosting a party for the defensive line of the Minnesota Vikings or catering a meal for the patrons of the local strip club, this should be on the menu. 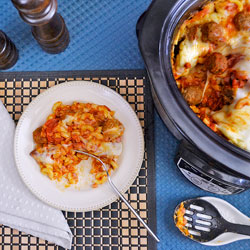 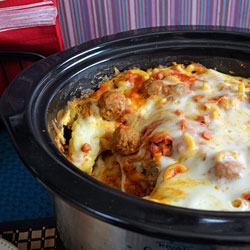 Every so often I cook the hearty snack for a local church group that I attend. This recipe is what I made for them last Wednesday night. I really enjoy making things for the group because it’s really the only time I get to cook for a large group of guys, which is a different test group for recipes. Most women would look at this dish and see nothing but calories, some would dare to try it, and I’m sure would enjoy it, but many would turn away at the site. To be fair, there are guys out there too that would see this and wince. 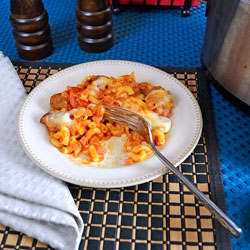 I have found there is no better test for a Football party snack than this group of guys. If it’s good, there will be no leftovers - no matter what the amount. I made this with the intent of making to much. I thought there was no way they would eat it all - and I was totally wrong, in fact the opposite happened. There wasn’t enough!

This dish is a must if your hosting a Super Bowl Party.

Make pasta
Bring 2 quarts of salted water to boil in a large pot, add pasta, return to boil. Cook 7 to 9 minutes for al dente. Then drain.

Assemble, cook, serve
In a large slow cooker, mix together meatball, ham, pepperoni, bacon, pasta sauce, pasta and most of cheese. Once mixed together top with remaining cheese, cover and cook on high setting for two hours or until cheese is melted and mixture is bubbly. Then serve.
Posted by behindthebites@gmail.com at 3:31 PM

"4 cups mixed in" is for the mozzarella cheese. I tweeked the ingredients list so that it is not as confusing. Thanks for the heads up!

Would it be ok to put it together the night before and keep it in the fridge, then cook it the next evening? And if so, would it be better to have it at room-temp before cooking it?

I don't see anything wrong with keeping it in the fridge overnight. It's safer to start cooking it once it's out of the fridge rather than wait for it to get to room temp on the counter.

This is very similar to my pizza hotdish! I use pizza sauce instead of pasta sauce minus the meatballs and ham and I add black olives and mushrooms. Yours sounds amazing and we will definitely be making it. :) Although I may still use pizza sauce....See not all of us girls are substained off of fruits nuts and berries. Some of us like real food. ;)

Finally a pasta dish I might be able to eat. I cannot eat pasta unless it is cooked really soft due to a surgery I had in 2006, so I am hoping I might be able to eat this without problems.Also, my fiance cannot eat pork so I am going to substitute turkey ham, turkey pepperoni and turkey bacon. There is only 1 ingredient in this dish that is going to be a problem for 1 person. My 1 son hates cheese. At least the other 9 people in my family love it. I think this is going to be a BIG hit with this family. We are carnivores lol. Going to make this when my fiance comes home on the 27th of June. He's a truck driver. Thanks for this recipe!!

This is a large recipe so I only did half and put in my new rectangular crockpot on low for 3hrs.

Could I put this on low for say 6 hours? Would it be ok or over done?

For Dan: Not sure about 6 hours. I wouldn't set it and forget it. If you cook it on the low setting check it periodically it after 3 hours.