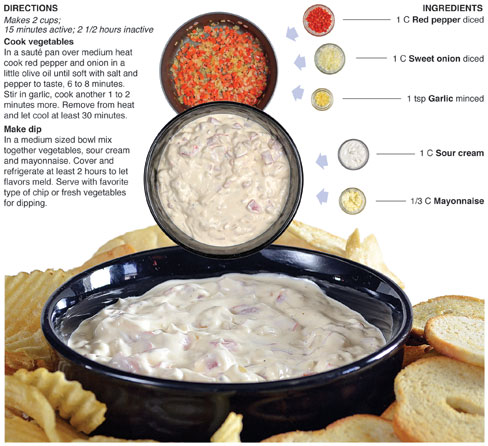 In the 1950s, the Thomas J. Lipton Company began promoting dip made from mixing their dried onion soup with sour cream or cream cheese. They sponsored radio and television programs and provided recipes on millions of their packages as promotion.    At the same time, potato chips were being mass marketed and it wasn’t long before the crunchy and salty treats became the favorite method of dip delivery.

The ease and convenience of chips and dip made them a popular snack to enjoy while watching television, which also became widely accepted in the 1950s and helped catapult the dip industry to the billion dollar business that it is today.

For this recipe, I make a homemade dip from red pepper and onion. The vegetables are sautéd with a little garlic to bring out their sweetness and to eliminate any raw or sharp flavors before being mixed with sour cream and mayo. The end result is a savory dip that will make devouring an entire bag of potato chips a simple task. 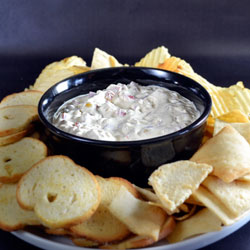 As the daily temperature slowly begins to rise in Northern Indiana I have been thinking more and more about warm weather cooking. I always think about grilling stuff, so I’m not really talking about that. I’m thinking about all the stuff that goes with grilled food.

Chips and dip are one such treat for me. They are also a party food, but curly chips with some creamy dip always reminds me of lunch on a hot summer day. I ate a lot of the two during summer vacation as a kid. When we were in school we had to eat the school lunch. In the summertime, there were many days that I was able to sneak off and eat a plateful of chips with a half tub of dip for my mid-day meal. I would just skip the tuna salad sandwiches Mom made for us all together.

Amazing how a plate of fried potatoes with a dairy based sauce could be enough fuel to play outside all day four hours and hours. These days it seems I need at least two meals and a gallon of coffee just to have enough energy to photograph and write about food. 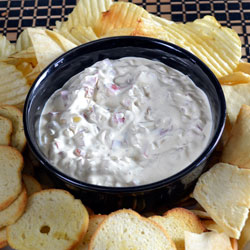 Cook vegetables
In a sauté pan over medium heat cook red pepper and onion in a little olive oil until soft with salt and pepper to taste, 6 to 8 minutes. Stir in garlic, cook another 1 to 2 minutes more. Remove from heat and let cool at least 30 minutes.

Make dip
In a medium sized bowl mix together vegetables, sour cream and mayonnaise. Cover and refrigerate at least 2 hours to let flavors meld. Serve with favorite type of chip or fresh vegetables for dipping.
Posted by behindthebites@gmail.com