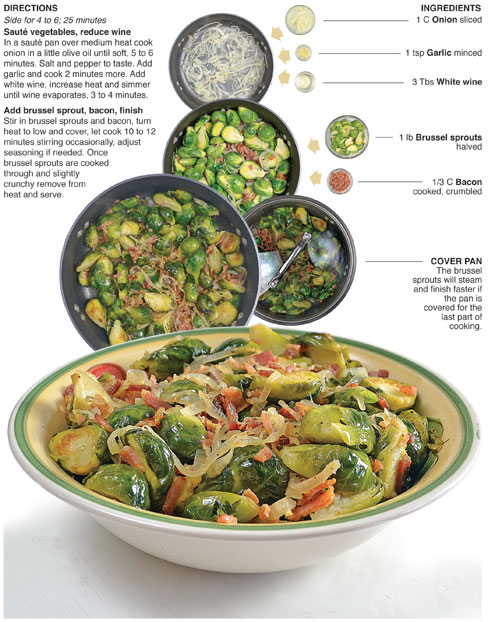 I took the easy route with these brussel sprouts. Bacon, sautéd onion and a little garlic can make about anything taste good. As the wild card, I threw in a little white wine just for some added pop. I needed these brussel sprouts to burst with flavor. It was the least I could do after a surreal experience the day before.

My Mom cooked up a batch for a family get together. I saw the bowl and suddenly I was overcome by the urge to snatch one up and gobble it down. After I popped it in my mouth like a humongous tic tac, something happened that I have never experienced. The brussel sprout had absolutely no flavor.

Not even a slightest hint of taste.

It was like chewing water! I called out in horror “Where is the flavor!” My Mom and sister came running into the kitchen concerned for my well being. Mom answered “I know, I think I cooked them to long.” I then cried out. “Cooking is not the problem! They have no flavor!”

What had I done deserve this? Had I lost the ability discern flavor? I would rather it taste bad than have no flavor at all. How was I supposed to react?

I had nothing to say.

I had entered the the food blogger's Twilight Zone.

It took three Cadbury eggs, a bag of peanut M&Ms, and two trays of peeps leftover from Easter to calm my nerves. I made it my mission the next afternoon to cook up a mess of brussel sprouts loaded with flavor, just to try and erase the trauma of Mom’s tasteless batch.

I have no idea what Mom did or didn't do to those brussel sprouts, or weather they were picked to soon or to late, but they tasted no different than the water they were cooked in! The mess I created for this post has helped put the episode behind me. 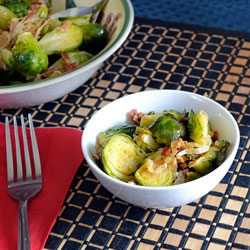 I can’t ever remember eating something and not tasting anything, unless I was in the throws of a raging head cold where all flavor and smell is gone from everything I consumed. It’s weird that it happened with brussel sprouts.

I bet there are thousands of kids out there that wished the brussel sprouts they were being forced to eat had no flavor. I have often wondered why kids hate them so much. I really don’t think it’s a flavor issue as much as it is an appearance issue. Most people steam or boil them, and too much cooking time makes their appearance go south in a hurry. Overcooked brussel sprouts look like a glob of goo on a plate. I don’t know anyone who thinks a glob of goo is appetizing - except for maybe Jabba the Hutt. 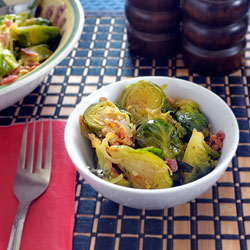 Add brussel sprout, bacon, finish
Stir in brussel sprouts and bacon, turn heat to low and cover, let cook 10 to 12 minutes stirring occasionally, adjust seasoning if needed. Once brussel sprouts are cooked through and slightly crunchy remove from heat and serve.
Posted by behindthebites@gmail.com at 6:49 PM

Email ThisBlogThis!Share to TwitterShare to FacebookShare to Pinterest
Labels: bacon, Brussel sprouts, side, side dish