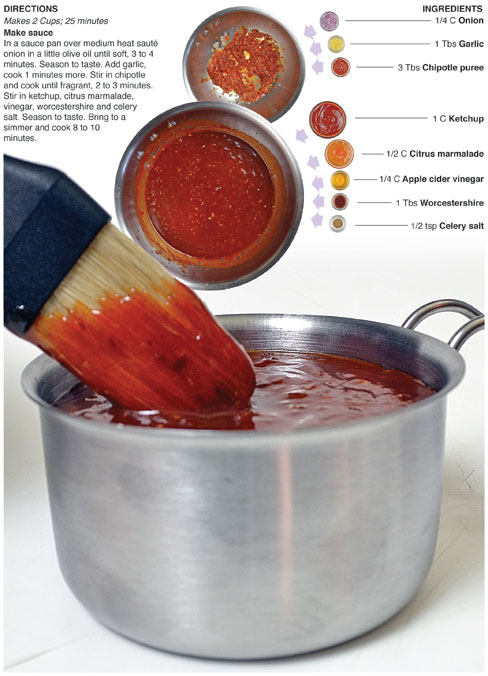 I had never tried citrus marmalade until last Monday evening. I had always been seduced by the strawberry, grape or orange flavors. I wasn’t sure if I would like it actually, after all, there is grapefruit in this stuff. As soon as I got a taste, I was sold - it was awesome.

The ladies from the Tree Frog Farm, in Avilla, Indiana, gave me a jar to experiment with. I recommend using the marmalade as a spread on warm breakfast rolls first, but I thought it would make an awesome element to barbecue sauce as well. I decided to use the marmalade with chipotle. Its smoky heat would be balanced out by the sweet and citrus.

While making the sauce, I used a lot of chipotle because I like the spice. The citrus marmalade worked great as a counter to the heat though. I used it on chicken tenders and practically inhaled an entire pound by myself. It was sweet, smoky and spicy with a hint of citrus. I think it could also be used with just chili powder instead of minced chipotle for a really sweet barbecue sauce that would be amazing on pork. 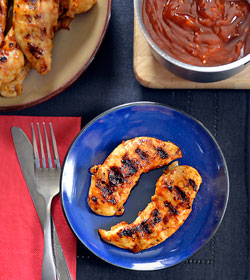 This is the second recipe I have made with an ingredient I picked up at the spring farmers market at Solomon Farms in Fort Wayne, Indiana. As I was passing out samples of my Pineapple Mustard Shrimp dish I made last week at the market, the ladies at the Tree Frog Farm gave me a jar of the citrus marmalade.

At first, I wasn’t exactly sure what I was going to do with it, but after my initial taste test I knew it would be a great element in barbecue sauce. This stuff is good enough on it’s own to eat quarts of at a time. I think my next recipe should be how to make the marmalade itself! I’m not sure if the ladies at the Tree Frog Farm will be willing to give up the recipe though. 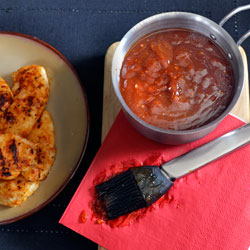 Make sauce
In a sauce pan over medium heat sauté onion in a little olive oil until soft, 3 to 4 minutes. Season to taste. Add garlic, cook 1 minutes more. Stir in chipotle and cook until fragrant, 2 to 3 minutes. Stir in ketchup, citrus marmalade, vinegar, worcestershire and celery salt. Season to taste. Bring to a simmer and cook 8 to 10 minutes
Posted by behindthebites@gmail.com

Good one, Justin. Thanks for stopping by and linking in. Cheers