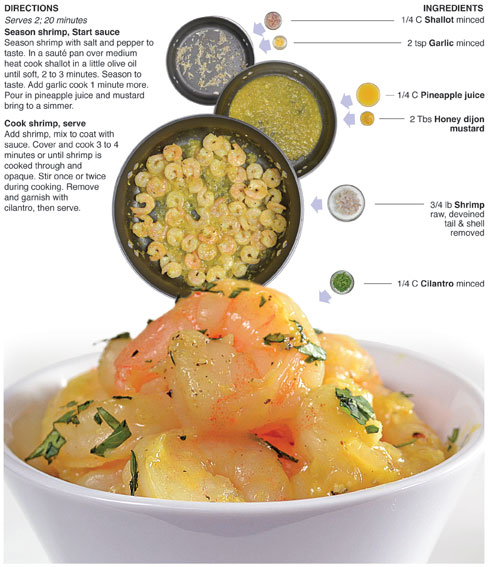 Mustard has been around since ancient times. According to Food, by Alan Davidson, its cultivation was written about in the 5th century B.C. by the Greek scribe Herodotus. Also, a method for making a condiment very similar to the mustard we have today was recorded in the first century A.D. by a Roman writer named Columella. It's safe to say the pungent little sauce has been pleasing palettes for quite some time.

The making of Mustard as a condiment is somewhat of science experiment. When a mustard seed is crushed and combined with water, a chemical reaction occurs that creates the signature flavor. The reaction is stopped and the flavor is held with the introduction of acid, such as vinegar. The signature yellow color in the typical mustard found on a hot dog at a backyard barbecue is made from the addition of turmeric.

For this recipe, I make a sweet and spicy sauce made from pineapple juice and honey dijon mustard purchased at a local farmer’s market. The mustard has a spicy punch that is mellowed out by honey. I cut further into the spice with the pineapple juice. The two, combined with shallot and garlic, form a delicious coating for shrimp that is sautéd to perfection. The sweet and sour sauce provides a nice accent to the shrimp, which is then finished with a little cilantro for a subtle pop of extra flavor. 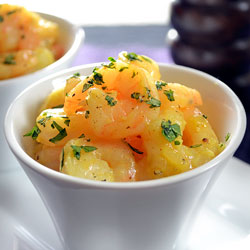 This is the first recipe I have made for the spring market at Salomon Farms here in Fort Wayne. The spring market opened last week and will happen each Monday for 10 weeks. There were many items to choose from but the homemade organic honey dijon mustard made by S&B in Auburn, Indiana caught my eye.

I took it home and developed this recipe to recreate and give out this week at the market. After this is gone I will roam around in search of another ingredient to feature in a dish for next week. 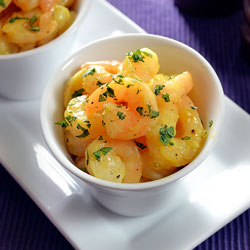 Season shrimp, Start sauce
Season shrimp with salt and pepper to taste. In a sauté pan over medium heat cook shallot in a little olive oil until soft, 2 to 3 minutes. Season to taste. Add garlic cook 1 minute more. Pour in pineapple juice and mustard bring to a simmer.

Cook shrimp, serve
Add shrimp, mix to coat with sauce. Cover and cook 3 to 4 minutes or until shrimp is cooked through and opaque. Stir once or twice during cooking. Remove and garnish with cilantro, then serve.
Posted by behindthebites@gmail.com