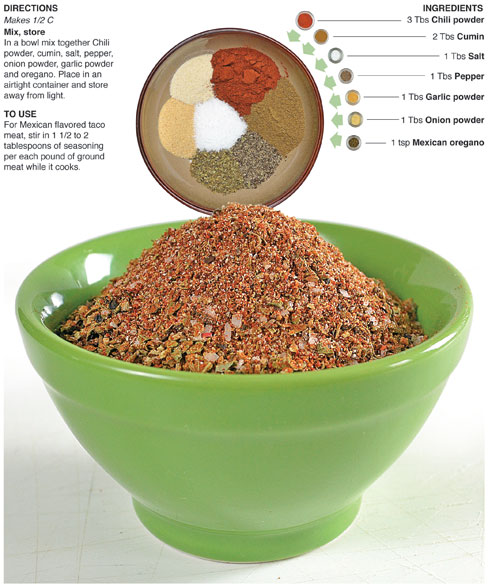 A few years back I tried an enchilada recipe and it called for chicken seasoned with a chili powder-cumin mix. After tasting the results store-bought taco seasoning became a thing of the past. This recipe is a little more complex than the original enchilada spice mix, but it’s not just for making taco meat, it can also be used on steak, chicken or any other protein as a flavorful rub.

For an even simpler mixture with the same resulting flavor as meat seasoned with an Old El Paso or Ortega taco seasoning packet, eliminate everything except the chili powder, cumin, salt and pepper. By making the seasoning at home, all the preservatives and crazy junk that manufactures put in their mixes is eliminated and the cook, not the company, controls the amount of sodium. It is also much cheaper in the long run to have a stocked pantry with the correct spices available rather than buying a packet every time taco flavoring is desired. 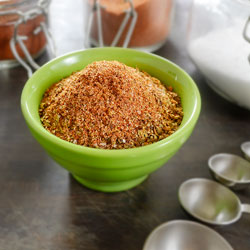 The last time I had taco seasoned with a packet was a taco salad at a small gathering. I was amazed at how salty and over seasoned the meat was. The packets are cheap, between 50¢ and 75¢, so many Americans just grab them without thinking.

Well, I have thought about it, and for all the artery-clogging, saddle-bag creating meals I cook, I have a better-for-your-health tip: Make taco seasoning with chili powder and cumin. (1 Tbs chili powder and 2 tsp cumin per pound) It tastes better, you control the salt and it's cheaper in the long-run. That is all. 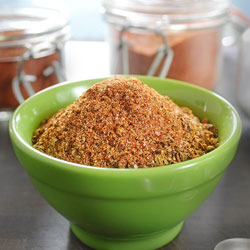 Mix, store
In a bowl mix together Chili powder, cumin, salt, pepper, onion powder, garlic powder and oregano. Place in an airtight container and store away from light.
Posted by behindthebites@gmail.com