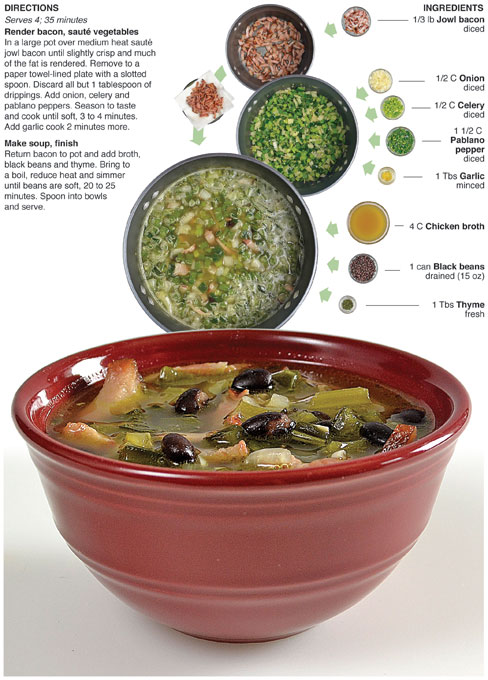 I was walking through Meijer the other night and a little package caught my eye. When I stopped to inspect, I found it was jowl bacon. It was cheaper than normal bacon and I had a soup on my mind – long story short – I bought it and everything else I needed to make a smoky black bean and pablano soup.

I had never worked with jowl bacon before.

Right off the bat I noticed that there was a lot more fat in it than regular bacon – And a little goes a long way. I diced up the pound package and realized I had enough to make about 6 gallons of soup. I divided it, reserved what I needed and froze the other portions. The first step to making the soup was rendering my new found ingredient.

And render it did!

I cooked the jowl bacon until some brown crispy goodness started to appear, then poured off all but a tablespoon of the fat. I had to get rid of some of it because the third of a pound I kept had created what seemed like a cup of drippings. I was really surprised my the amount of fat that came from such a small amount. 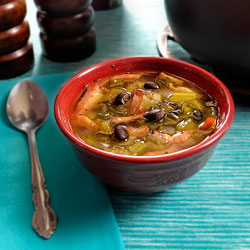 I used the drippings to sauté the veggies, then returned the bacon and added the rest of the elements to the pot and let it simmer away.

In the end, it turned out to be a flavorful bite the featured the pablano pepper. As the soup simmered more of the jowl bacon broke down and the fat melted away into the rest of the soup, giving it a nice but somewhat greasy flavor. A couple days later I went to eat leftovers and was surprised to see that once cooled, the soup became solid. There was enough fat from the jowl bacon to solidify the whole thing once chilled down!

BEHIND THIS BITE
In hind site, I would just rather use regular bacon because it is the superior product for making this type of soup. I want to work with jowl bacon again though, but I want a recipe that needs that much fat or added flavor – for soups, I’ll stick with regular bacon. The jowl bacon was just too greasy for my taste, but it might be just what some people are looking for. 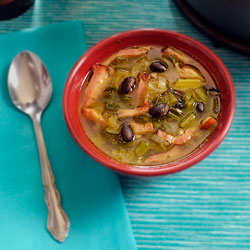 Render bacon, sauté vegetables
In a large pot over medium heat sauté jowl bacon until slightly crisp and much of the fat is rendered. Remove to a paper towel-lined plate with a slotted spoon. Discard all but 1 tablespoon of drippings. Add onion, celery and pablano peppers. Season to taste and cook until soft, 3 to 4 minutes. Add garlic cook 2 minutes more.

Make soup, finish
Return bacon to pot and add broth, black beans and thyme. Bring to a boil, reduce heat and simmer until beans are soft, 20 to 25 minutes. Spoon into bowls and serve.
Posted by behindthebites@gmail.com at 1:26 PM