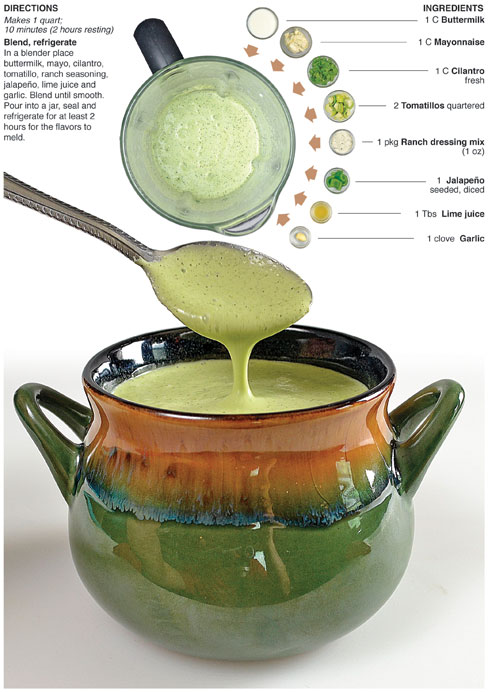 Recently I discovered a number of recipes for Tomatillo Ranch Dressing from the Cafe Rio Mexican Grill, a chain restaurant located mostly in the Western United States. The dressing is on a list that includes Michael Jordan, The Empire Strikes Back, Led Zeppelin and cargo shorts. They are what I like to call “the greatest ever.” The dressing is so good that it makes the “special sauce” on a McDonald’s Big Mac seem like “OK sauce.” I personally think it is so delicious that I’ve considered doing shots of it to wash down french fries.

Last weekend I ate at the Salsa Grille in Fort Wayne and to my excitement they had their own version of the dressing. I asked the manager for the recipe and he told me where to find it on-line, so I looked it up.

For this recipe, I’m sharing my copycat version of the Cafe Rio’s Tomatillo Ranch Dressing. There are several places that this recipe can be found and it’s not something I invented myself, but it’s so good it must be shared — It’s my culinary obligation. 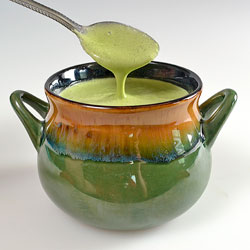 I first tasted Tomatillo Ranch Dressings at the St. James Deli in New York City. I have mentioned this little bodega many times here at Behind the Bites, but this sauce was THE reason I kept going back. They called it “White Sauce.” I once successfully bartered a trade for it from a young man working the graveyard shift. I traded him a CD from the heavy metal band I was playing drums in for a pint-sized bottle.

I put it on everything I ate for three days in a row. Then by accident I left it out all night. It was a devastating mishap, because it happened before I could really narrow in on the ingredients to recreate it. Honestly, It would have been a while before I would have figured it out because I thought the secret to the sauce was pickle brine, but really the secret here is the ranch packet. It would have taken me a while to go that direction simply because I thought it didn’t include any premixed seasoning packets.

I was so happy when I found this recipe on-line the other day, I will always have it on hand now to dress salads, sandwiches and tacos - I think I’ll go drink a glass of it right now. 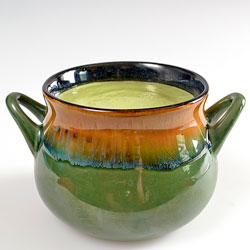 Blend, refrigerate
In a blender place buttermilk, mayo, cilantro, tomatillo, ranch seasoning, jalapeño, lime juice and garlic. Blend until smooth. Pour into a jar, seal and refrigerate for at least 2 hours for the flavors to meld.
Posted by behindthebites@gmail.com

that looks great Justin. I haven't had tomatillo and am not sure they are available here - will look out for them. Cheers

Do the tomatillos need to be cooked before?

No need to cook the tomatillos!

Thanks! Gonna give this a try!

I made this recipe for a taco bar party. It was a hit! I am always looking from dressing recipes for taco salad. This one has become a new favorite. Thank you!!!