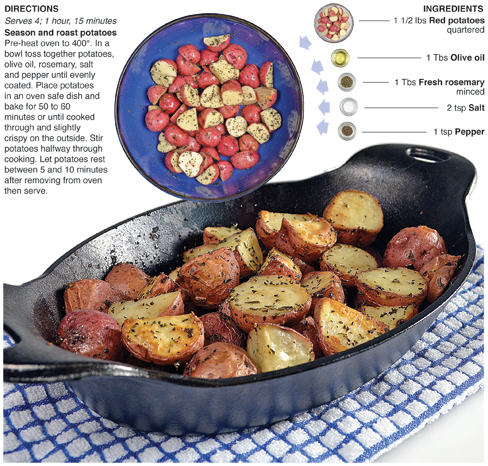 Sometimes simple is just better. A potato is delicious when it is cooked perfectly with salt and pepper. The addition of a fresh herb is an easy way to crank up the flavor. This potato dish is as simple as it gets and it turned out incredibly tasty, the difficult part about it was being patient enough to allow the potatoes to roast until they were fluffy and delicious.

These potatoes were a side dish to a grilled skirt steak, so they didn’t need to be fancy - just cooked right. The addition of rosemary elevated the flavor and gave it a nice fragrance which allowed it to stand out on the plate but not over power the star attraction.

It is essential to have them seasoned properly and coated with oil, turning or tossing them half way through will help the process also. A perfectly cooked potato is pretty much heaven on a plate.

BEHIND THIS BITE
I went out and bought the cast iron dish in the photos specifically for this recipe. I had noticed it at a Kroger store and when I started thinking about roasting potatoes I knew it was the perfect dish to cook AND photograph them in.

I’m really pleased with the main art for this recipe, there really isn’t much to the graphic, the dynamic photo really helps make it pop. The towel underneath the cast iron vessel adds to the detail of the shot as well. I’m going to use some of these element in the future, the angle of the dish and towel for extra color work and are things I think I can build on when the dish calls for it.

Season and roast potatoes
Pre-heat oven to 400°. In a bowl toss together potatoes, olive oil, rosemary, salt and pepper until evenly coated. Place potatoes in an oven safe dish and bake for 50 to 60 minutes or until cooked through and slightly crispy on the outside. Stir potatoes halfway through cooking. Let potatoes rest between 5 and 10 minutes after removing from oven then serve.
Posted by behindthebites@gmail.com