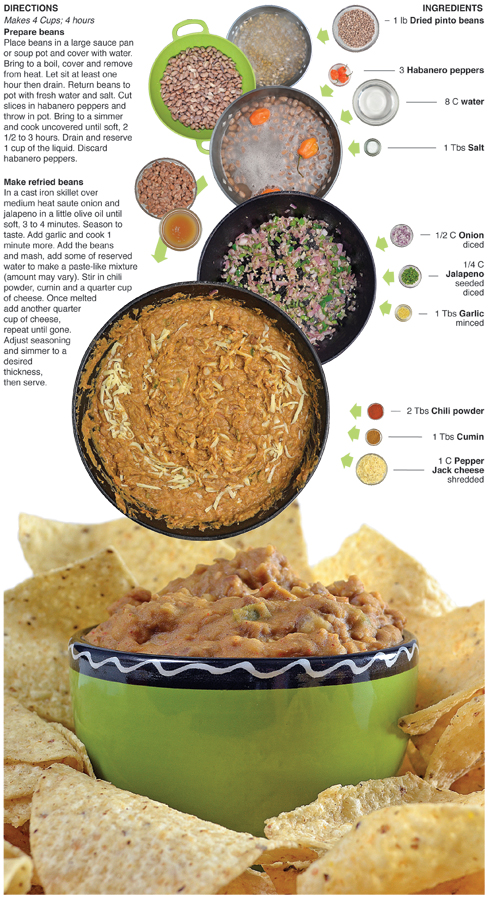 This recipe is an update of a basic refried bean dish I made back in May. This time I added some choice spices and a little cheese to the final product. I also tried to extract some heat and flavor from three habanero peppers while I cooked the beans.

I was going for a much spicier bean dip than what I ended up with. I have used this habanero extraction technique before in barbecue sauce and it worked like a charm, but for some reason it didn’t translate with the beans, I’m not sure but I think the amount of beans to the ratio of liquid might have been what neutralized the heat. It was a little spicy but not habanero spicy.

I could have gotten much more kick by skipping the habanero and just adding cayenne pepper in the final stage. The habanero was tame but the jalapeno pepper and the pepper jack cheese were able to bring a little kick of their own to the party.

BEHIND THIS BITE
I put together a nacho bar for a church gathering recently and decided it was a good opportunity to improve on my refried bean recipe from a few months back. I have found that nacho, taco or even hot dog bars are some of the best ways to feed a group of people. All you need is a variety of toppings to go along with the main proteins.

Not everyone at the party is going to put all the items on their hot dog or nachos, they will pick and choose. This can backfire if everyone goes over board, but in general, enough of each topping to cover half to three-quarters of the guests is usually more than enough. If something runs out then people have other options.

If your not sure what to take to the next family get together try a couple bags of tortilla chips, canned chili and nacho cheese, throw in some fresh onions and tomato and I’ll bet it’ll be a hit.

Prepare beans
Place beans in a large sauce pan or soup pot and cover with water. Bring to a boil, cover and remove from heat. Let sit at least one hour then drain. Return beans to pot with fresh water and salt. Cut slices in habanero peppers and throw in pot. Bring to a simmer and cook uncovered until soft, 2 1/2 to 3 hours. Drain and reserve 1 cup of the liquid. Discard habanero peppers.

Make refried beans
In a cast iron skillet over medium heat saute onion and jalapeno in a little olive oil until soft, 3 to 4 minutes. Season to taste. Add garlic and cook 1 minute more. Add the beans and mash, add some of reserved water to make a paste-like mixture (amount may vary). Stir in chili powder, cumin and a quarter cup of cheese. Once melted add another quarter cup of cheese, repeat until gone. Adjust seasoning and simmer to a desired thickness, then serve.
Posted by behindthebites@gmail.com at 12:22 PM