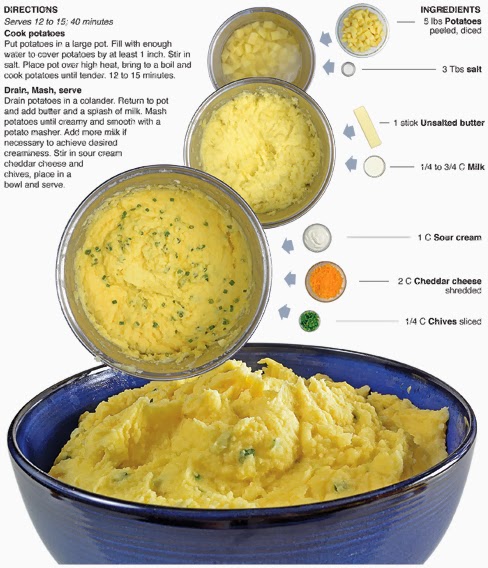 If I’m eating roasted turkey with gravy, I love to have mashed potatoes on the plate. Creamy spuds are my second favorite Thanksgiving side dish behind green bean casserole and when I say creamy, I mean creamy! No lumps, lots of butter and nice wispy peaks.

Earlier this fall I made basic creamy mashed potatoes and I prepared this batch the exact same way, but this time I added cheddar cheese and chives to punch up the flavor.

I could eat this stuff by the fist full! And that is what I basically did when I served them. I used my finger to scoop a bite out of the bowl every time I passed by and no one was looking. Mashed potatoes to me are like frosting on cake and it’s nearly impossible for me to walk passed without snatching up a sample. Adding further to the temptation was the flavorful cheddar cheese and fresh chives.

BEHIND THIS BITE
As I mention in the introduction, I documented a prime rib dinner back in September and creamy mashed potatoes were part of the spread. I made them as basic as possible because I knew that I could use many of the elements again whenever I wanted to make mashed potatoes for a new post. Most of the photography in this recipe information graphic was originally shot for the basic creamy mashed potatoes. Only the last stage featuring the chives and cheddar and the final shot at the bottom of the recipe are new. I made this exactly like the basic version until I made the additions of cheddar and chives.

I have been re-using photographs of prepped ingredients for a long time, but this is a relatively knew technique I’ve started to develop involving basic recipes. This allows me more time to be creative and less time doing production work. Look for another mashed potato recipe soon, because Christmas dinner wouldn’t be as special without a batch of creamy spuds.

Cook potatoes
Put potatoes in a large pot. Fill with enough water to cover potatoes by at least 1 inch. Stir in salt. Place pot over high heat, bring to a boil and cook potatoes until tender. 12 to 15 minutes.

Drain, mash, serve
Drain potatoes in a colander. Return to pot and add butter and a splash of milk. Mash potatoes until creamy and smooth with a potato masher. Add more milk if necessary to achieve desired creaminess. Stir in sour cream, cheddar cheese and chives, place in a bowl and serve
Posted by behindthebites@gmail.com