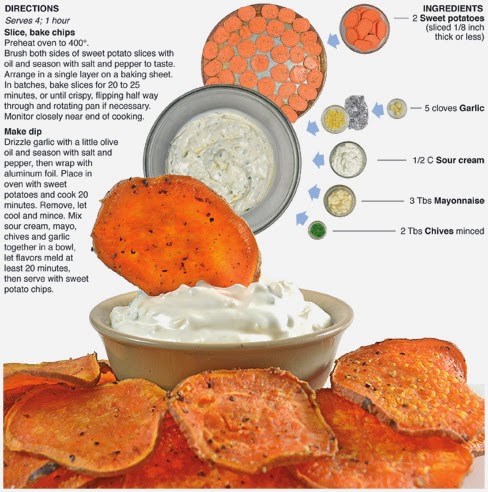 Little is known about the menu at the first Thanksgiving dinner with the pilgrims and Native Americans at Plymouth, but more than likely sweet potatoes weren’t on it. Their introduction as a Thanksgiving staple occurred during the 20th century and is the result of the spread of Southern cooking throughout the United States, where it had been a regional mainstay for generations.

I personally have never been crazy for sweet potatoes but that is because I don’t have much of a sweet tooth. I enjoy them most when they are prepared without lots of sugar.

For this recipe, I turn the sweet potato into a savory baked chip and serve it with a roasted garlic and chive dip. The potatoes need to be watched closely near the end of cooking because the window between under cooked and over-cooked is small, but well worth watching for. A tray of sweet potato chips and creamy dip is a nice little compliment to go with the mounds of savory Thanksgiving turkey and delicious sides.

BEHIND THIS BITE
With this recipe, I launch the first salvo of Thanksgiving 2013.

This is the fourth time around for me as far as writing and documenting recipes for the holidays. I’m improving each time. (I hope to have it down pat by year 10!) This time I made a couple of dishes early on for the weekly print column (Sweet potato chips is one of them) then served a full-on Thanksgiving dinner to my niece, two nephews and my Mom and Dad on November 16. This will allow me to have all the recipes written with graphics and pretty photos published in time for people to use them or get ideas for creating there own Holiday spread. I still have one more recipe to complete though, which involves the leftovers, so I'm not totally finished.

I’m really happy with how all of my dishes turned out this year. I planned well, which resulted in a yummy turkey and five better than average sides. I didn’t make any dessert, because when it comes to Thanksgiving I’m way too full of the savory stuff to want any sweets. I’d rather just snack on turkey and green bean casserole as day goes along. I'll save the deserts for Christmas.

Slice, bake chips
Preheat oven to 400°.
Brush both sides of sweet potato slices with oil and season with salt and pepper to taste. Arrange in a single layer on a baking sheet. In batches, bake slices for 20 to 25 minutes, or until crispy, flipping half way through and rotating pan if necessary. Monitor closely near end of cooking.

Make dip
Drizzle garlic with a little olive oil and season with salt and pepper, then wrap with aluminum foil. Place in oven with sweet potatoes and cook 20 minutes. Remove, let cool and mince. Mix sour cream, mayo, chives and garlic together in a bowl, let flavors meld at least 20 minutes, then serve with sweet potato chips.
Posted by behindthebites@gmail.com at 7:26 PM