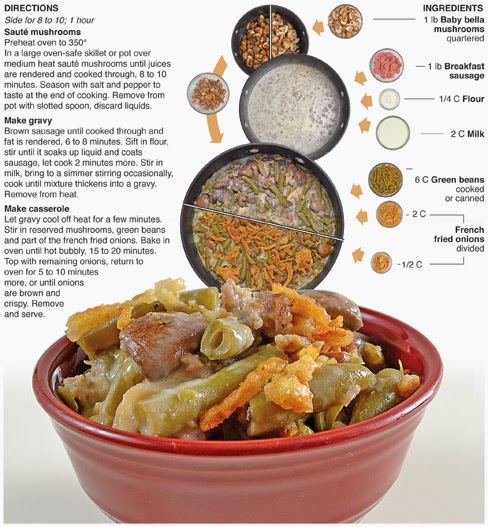 Since I was a little kid I have always loved green bean casserole and looked forward to it every year at Thanksgiving. My Aunt always made a batch for the occasion and it was one of just a few dishes that she ever made. Cooking wasn’t her passion so she kept it simple and green bean casserole was one of her staples. It’s made from a combination of processed ingredients and it comes together in a snap.

I have made green bean casserole several times as an adult and I have learned a few tricks to making it extra delicious.

The traditional casserole uses canned cream of mushroom soup, for this recipe I replace it with fresh sauteéd baby bella mushrooms and sausage gravy made from scratch. Bursts of flavor from the fresh mushrooms and seasoning from the sausage add an element of savoriness that the traditional dish doesn’t have. This is a simple way of taking a tasty classic and cranking up the flavor for a special treat fit for any Thanksgiving spread.

BEHIND THIS BITE
As I mentioned in the intro, I have made green bean casserole many times. A few years back I watched an episode of Good Eats and host Alton Brown made it completely from scratch. This was a week or so before I would be hosting my own Thanksgiving party, so I decided to make it part of my spread. Of all the stuff I was planning to cook, I thought the scratch-made casserole would be the crown jewel. To make it from scratch requires some attention to detail, and when you’re making the Turkey and a number of other dishes at the same time, the ultimate green bean casserole might be a little too much to handle.*

I figured this out the hard way.

I had too much going on to do the recipe justice. The first task of making the crispy onions was a complete failure. With my attention elsewhere, I burnt the entire batch and had to throw them out. I didn't have the time or product to re-make them. Next, I did something wrong with the roux to make the creamy part of the recipe and it never thickened. The beans and mushrooms turned out just fine. The end result was nicely cooked green beans and sautéed mushrooms in a warm milk mixture.

People still ate it, but for me, my crown jewel became the thorn in my side.

*The recipe presented in this post is really quite simple to pull off for a Thanksgiving spread, especially if you make the sides ahead. At the time, I didn't have the slightest clue on how to plan a big meal.

Sauté mushrooms
Preheat oven to 350°
In a large oven-safe skillet or pot over medium heat sauté mushrooms until juices are rendered and cooked through, 8 to 10 minutes. Season with salt and pepper to taste at the end of cooking. Remove from pot with slotted spoon, discard liquids.

Make gravy
Brown sausage until cooked through and fat is rendered, 6 to 8 minutes. Sift in flour, stir until it soaks up liquid and coats sausage, let cook 2 minutes more. Stir in milk, bring to a simmer stirring occasionally, cook until mixture thickens into a gravy. Remove from heat.

Make casserole
Let gravy cool off heat for a few minutes. Stir in reserved mushrooms, green beans and part of the french fried onions. Bake in oven until hot bubbly, 15 to 20 minutes. Top with remaining onions, return to oven for 5 to 10 minutes more, or until onions are brown and crispy. Remove and serve.
Posted by behindthebites@gmail.com at 1:04 AM