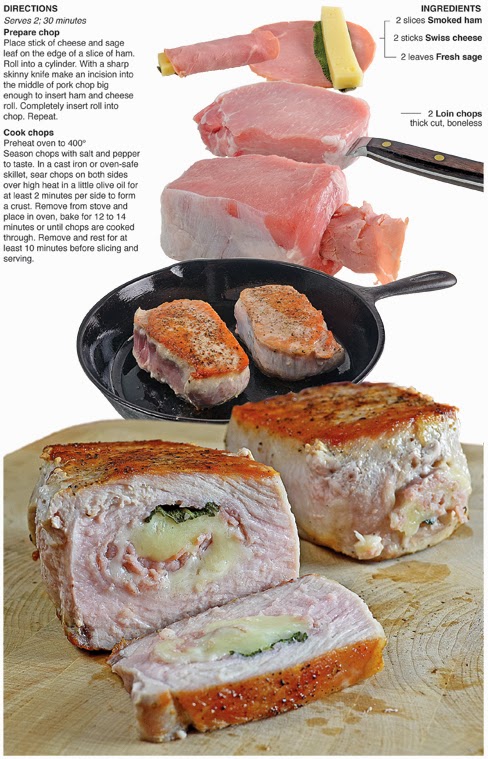 My favorite cut of pork is the loin. It can be roasted, grilled, pan fried, braised or cooked just about anyway and it provides a canvass that works well with different flavors from fresh herbs, to marinades and spice rubs, even fruits. Recently, as I scanned the meat counter at the local grocery store, two enormous boneless loin chops jumped out at me and I knew they were destined to fill my belly.

They were cut extra thick, at least an inch, making them perfect to stuff with a special surprise. A normal or 3/4-inch cut loin chop isn’t thick enough to hold much when stuffed, but thicker cuts, like the chops features here are perfect. They can hold enough stuffing for it to be a major element.

I chose fresh sage with Swiss cheese wrapped in a thin slice of smoked ham for the stuffing. The ham would add a smoky element and make for a nice wrapper for the other ingredients.

All of these elements together added up to a tasty main course. I seared a nice crust on the outside in a cast iron skillet then finished them in the oven – which is a fun way to prepare chops, especially for a foodie like myself.

BEHIND THIS BITE
I tried something new with the presentation of this recipe. There are only 4 ingredients, but there are a number of steps in the preparation to get to the final product. With an emphasis on preparation, I decided to shoot the entire recipe at a 3/4 infinity view on a white back ground.

This is probably the only time I’ve ever presented an entire information graphic recipe without any birds-eye view shots. I think the technique will take some refining on my part but overall I like the look of this post. The repeated angle of the different elements combined with the slight overlap of each step seems to create a cascading feel in the presentation. I think I should explore this type of documentation again when it presents itself in the future.

Prepare chop
Place stick of cheese and sage leaf on the edge of a slice of ham. Roll into a cylinder. With a sharp skinny knife make an incision into the middle of pork chop big enough to insert ham and cheese roll. Completely insert roll into chop. Repeat.

Cook chops
Preheat oven to 400°
Season chops with salt and pepper to taste. In a cast iron or oven-safe skillet, sear chops on both sides  over high heat in a little olive oil for at least 2 minutes per side to form a crust. Remove from stove and place in oven, bake for 12 to 14 minutes or until chops are cooked through. Remove and rest for at least 10 minutes before slicing and serving.
Posted by behindthebites@gmail.com