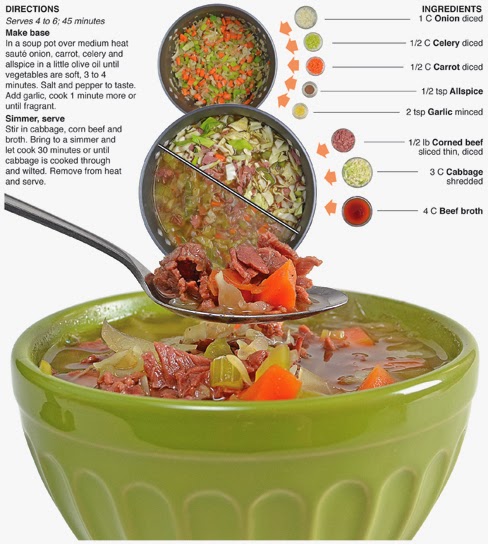 In my family it was a tradition to eat cabbage on New Year’s Day. I remember it being overcooked and mushy. They would sauté two shredded heads of cabbage in oil in a skillet. I think the problem was that my elders cooked it to long because I dreaded having to eat the smelly stuff.

I always tried to avoid it until the last minute which is when the New Year’s Cabbage Police, consisting of my Mom and Aunt, would ask “Did you eat your cabbage? It will bring you prosperity all year long.” It was a tradition to eat on New Year’s Day and they enforced it.

Today, I’m a big fan of cooked cabbage and plan to have it on January 1st, just as I do every year. I like to cook it in soups, like this recipe, or use it in dishes that are more tasty than just plain fried. I hope it has helped me prosper. Regardless though, it’s a tradition I’m passing on to the next generation in our family, just as my Mom and Aunt made sure to pass on to us. Traditions like these connect the present to our past and future.

BEHIND THIS BITE
Since I published the column above, it seems as though my Mom decided to change the rules on how cooked cabbage can be prepared for New Years Day. She said that it must be fried and all of it must be eaten. I have no idea where she came up with these rules, but I think they must have been passed on to her from a distant relative that liked to torture others with bad food. Writing about our family tradition in the local paper must have rekindled her fondness for fried cabbage because it has been a while since it's been served that way at a New Years gathering.

I volunteered to make the cabbage for our family's New Year celebration, but she and my cousin insisted that the cabbage be fried. I compromised and made a nice pot of cabbage soup and when I got to the gathering, I fried a head of shredded cabbage that my cousin had set up to appease the new found traditionalists.

Is there some sort of irony to eating cabbage prepared in the most undesirable way that makes you prosper? I say no, the tradition is to eat cabbage, making it as tasty as possible should be the objective, gulping it down to avoid gagging on it seems preposterous.

Now I must convince my family to think differently about this, or I’m going to be faced with eating a bowl of smelly cabbage each New Year’s Day for the rest of my life. Either that, or come up with a way to fry cabbage and make it delicious, which might be the ticket. Better get to work because I've got less than a year to do it.

Make base
In a soup pot over medium heat sauté onion, carrot, celery and allspice in a little olive oil until vegetables are soft, 3 to 4 minutes. Salt and pepper to taste. Add garlic, cook 1 minute more or until fragrant.

Simmer, serve
Stir in cabbage, corn beef and broth. Bring to a simmer and let cook 30 minutes or until cabbage is cooked through and wilted. Remove from heat and serve.