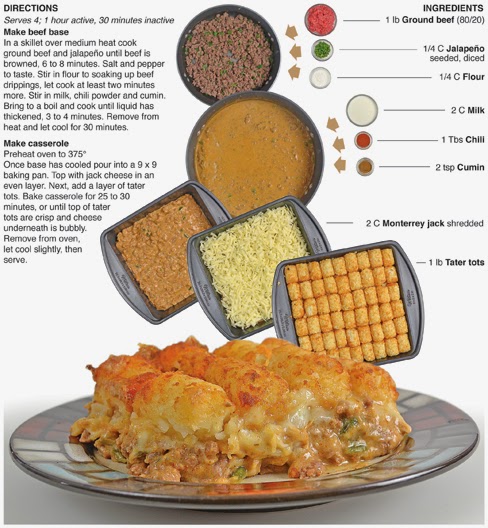 Tater tot casserole is a classic and I have been eating it at family gathering and pot lucks since childhood. There are many variations of the dish, but the majority involve ground beef, canned cream soup and are topped with tater tots.

I decided that it was time to make my own version of the casserole but knew I had my work cut out for me, because if I was going to recreate a dish so universally loved I was going to have to swing for the fence to do it justice.

For my version of tater tot casserole, I replace the traditional canned cream soup and ground beef mixture that serves as the base with a thick, taco flavored ground beef gravy that comes together much like a scratch-made sausage gravy. It is topped with the usual tater tots, but in between the base and potatoes I place a thick layer of creamy jack cheese. The end result is a delicious Mexican flavored casserole topped with crispy tater tots that’s sure to give the classic version a run for its money.

BEHIND THIS BITE
This version of tater tot casserole is absolutely fantastic. I pulled it from the oven and let it cool a little before starting to photograph it. I sampled it to check the flavor and it was all I could do to keep myself from eating the entire pan before even getting a the final shot of the recipe. The taco-chili flavor of the beef gravy combined with the jack cheese and crispy tater tots was literally the best tater tot casserole I had ever eaten. I took some to share with Mom and Dad that evening and they both agreed that it was out of this world.

If I were to ever own a restaurant I would try to put items like this out for daily specials to see how they would go over. I have never seen a tater tot casserole on a restaurant menu but if I were asked to make a version for one, I would start with this. The only change would be to make the potato topping from scratch - That would make this totally gourmet!

Make beef base
In a skillet over medium heat cook ground beef and jalapeño until beef is browned, 6 to 8 minutes. Salt and pepper to taste. Stir in flour to soaking up beef drippings, let cook at least two minutes more. Stir in milk, chili powder and cumin. Bring to a boil and cook until liquid has thickened, 3 to 4 minutes. Remove from heat and let cool for 30 minutes.

Make casserole
Preheat oven to 375°
Once base has cooled pour into a 9 x 9 baking pan. Top with jack cheese in an even layer. Next, add a layer of tater tots. Bake casserole for 25 to 30 minutes, or until top of tater tots are crisp and cheese underneath is bubbly. Remove from oven, let cool slightly, then serve.
Posted by behindthebites@gmail.com