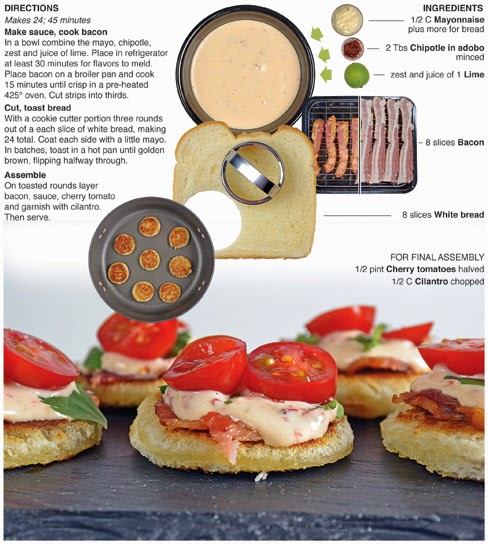 I think my favorite things to make in the kitchen are bite-sized savory snacks. It’s easier to experiment with tiny treats because it’s just one bite, and you’re not committed to filling your belly with it. This allows room to work with a new ingredient or add a little more heat than usual. A small snack with some spicy fire is much more tolerable than an entire main course, which can affect a person for hours afterward.

For this recipe, I make a bite sized play on the classic BLT. I use cherry tomatoes with bacon on little toasted bread rounds cut from a slice of bread. I replace the lettuce with a sprinkle of cilantro and add a special mayonnaise based sauce featuring smoky chipotle pepper, to compliment the bacon, and the juice and zest of lime to brighten up the flavor. The combination of the sauce and cilantro give this little mini bacon sandwich a spicy southwestern flavor that will help make a plate of these disappear as fast as common sense from a newly elected member of congress.

BEHIND THIS BITE
I rarely muse about my writing process, but I have a little insight to my thought process. For three years, while I lived in New York, I performed stand up comedy, which was long enough to have a few minutes of decent jokes to perform.

Good stand up is really about good writing, when I sat down to write new material I would start with a story and look for opportunities to insert something witty. Once I found a spot for a joke I would write several different punch lines until I found something that I thought would get laughs, often I would come up with a number of lines before I found the one that I wanted to perform.

I do the same thing when writing for my column and blog. I had an opportunity for a smart-ass comment in the last line of the intro. I ended up with the comment about common sense and politicians, which was my favorite line among many, that I brain stormed through. Here are some of the others that didn’t make the cut:

... help make a plate of these disappear faster than a crowd of teenagers from beer bash in the woods busted by the cops.

... help make a plate of these go down faster than glasses of beer on penny draft night at the local college bar.

... help make a plate of these disappear faster than a pocket full of change at convention for pan handlers.

... help make a plate of these disappear faster than free bullets at a gun convention.

I think I chose the best one.

Make sauce, cook bacon
In a bowl combine the mayo, chipotle, zest and juice of lime. Place in refrigerator at least 30 minutes for flavors to meld. Place bacon on a broiler pan and cook 15 minutes until crisp in a pre-heated 425° oven. Cut strips into thirds.

Cut, toast bread
With a cookie cutter portion three rounds out of a each slice of white bread, making 24 total. Coat each side with a little mayo. In batches, toast in a hot pan until golden brown, flipping halfway through.