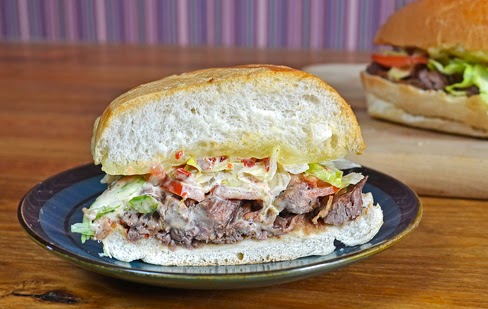 I bought a "manager's special" skirt steak at Kroger recently for less than $3.00 and was exited about the great deal, but knew it was on special because it had to be cooked in the next 24 hours. "Manager's special" is the grocery store lingo for "cook this now because it's about to turn green."

I decided to tenderize the steak, grill it and make a Mexican torta sandwich for dinner. I had a chipotle lime mayo sauce leftover from a recipe I had documented the day before and thought it would be a great condiment for the sandwich.

To make the steak tender enough for the torta, I beat it until it was flat and falling apart – which was a nice stress relief. I knew the better I tenderized the steak, the better the sandwich would be, so it was an inspired beating. I seasoned it with salt and pepper and grilled it for a couple of minutes each side. After a small rest I diced up the steak and it was ready for the torta.

I used bollilo bread, which I sliced in half length-wise. I slathered the bottom with refried beans and layered a couple of slices of jack cheese on the top half. I stuck the bread in the oven to toast and melt the cheese. Once that was finished I added the steak, garnishes and the chipotle lime mayo sauce resulting in a great sandwich that I would eat again anytime.

BEHIND THIS BITE
I hadn't planned on producing this recipe in print or on-line so I didn't document the process. After eating the sandwich (I made four) I was impressed and decided to take a few shots of the finished product for a simple post.

I hope to go all out on a torta here at Behind the Bites one day because it is one of my favorite types of sandwich. I was introduced to them at La bamba (a restaurant chain known for burritos as big as your head) when I was in college and have loved them every since. I better get to work though because a good torta has lots going on with it, much more than what I have going on here, although I must say, this torta was a tasty treat indeed.

Tenderize, grill steak
With a meat tenderizer, beat steak until flattened with slight tears throughout. season with salt and pepper to taste. Grill over high heat for 4 to 6 minutes or until medium rare, turning once during cooking. Remove from grill and rest for at least 5 minutes, then dice.

Toast, assemble sandwich
Slice bread in half, spread beans on bottom half and layer cheese on top half, place in 400° oven for 5 to 6 minute or until cheese is melted and bread is toasted. Layer steak and garnishes on bottom half, drizzle with chipotle lime mayo and cover with top half of bun, cut in two, then serve.
Posted by behindthebites@gmail.com at 5:40 PM