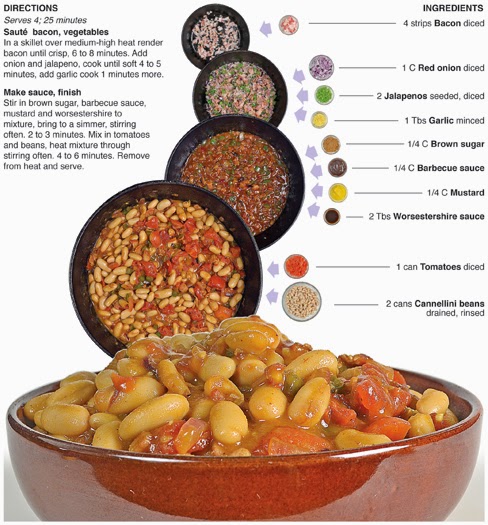 When cooking outside most people think of a cut of meat being seared over flames, but there are a number of side dishes that can be made with a skillet on a grill or fire as well. One such dish is baked beans, which can be baked, but more often is a dish of beans that are stewed in a sauce. The Native Americans used to prepare them with maple sugar and bear fat in a pit lined with hot stones. Early colonists replaced the pit with a pot, the bear fat with hog fat and the dish evolved into the baked beans that we have today, according to the Oxford Companion to American Food and Drink.

For this recipe, I make a version of baked beans that isn’t baked at all. The entire dish can be prepared in a skillet on a stove top or grill. It features canned cannellini beans, bacon and diced tomatoes that are held together by a mixture of common sauces and heated through. The dish comes together quickly and is a perfect compliment to grilled meat on a warm summer night out on the patio.

BEHIND THIS BITE
During the summer most of my recipes evolve around the grill – mostly sauces and rubs for different cuts of meat that are cooked over a fire. Sprinkled in with all the grill-centric recipes are sides that go with such creations — Baked beans is one of those sides.

This recipe is super simple and is intended to be made in a cast iron skillet over the flames, right next to the protein as it sears on the grill grates. Baked beans are really an ideal side dish at a barbecue because the beans are cooked in a saucy bath that is much like barbecue sauce in the first place – in fact, this recipe actually has barbecue sauce as one of the ingredients.

I had been contemplating a baked beans recipe for some time and I’m glad I’ve finally got down to publishing one — right in time for the hottest part of summer in Indiana.

Make sauce, finish
Stir in brown sugar, barbecue sauce, mustard and worsestershire to mixture, bring to a simmer, stirring often. 2 to 3 minutes. Mix in tomatoes and beans, heat mixture through stirring often. 4 to 6 minutes. Remove from heat and serve.
Posted by behindthebites@gmail.com