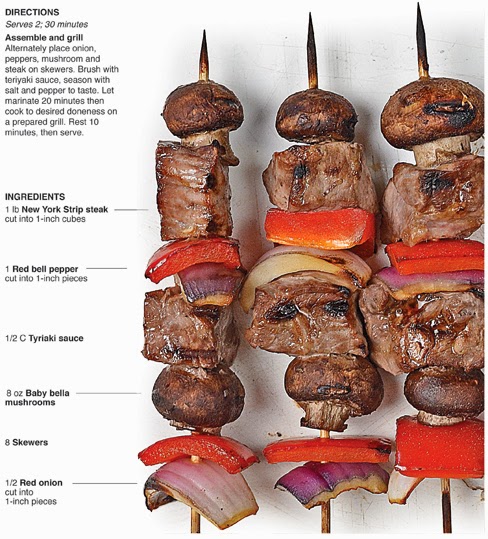 There is something awesome about food on a stick. I’m not sure what makes it so awesome – all I know is no matter how old I get, I’m still a sucker for corn dogs and popcycles.

One of my favorite stick foods is kabobs cooked on the grill. I make them differently depending on the meat I’m using. When I opt for chicken or pork, I separate the veggies from the protein so that I can cook the meat all the way through and not over-cook the veggies in the process. I don’t worry about that when I make beef kabobs. I like my steak rare to medium-rare which is the perfect amount of time to make the veggies al denté, or a little bit crunchy.

For this recipe, I use a New York Strip steak for the meat along with red peppers, red onion and mushrooms. I brush on teriyaki sauce for a marinade and season it with salt and pepper. After a nice sear on the grill, the end result is juicy chunks of steak with a nice variety of vegetables – served all together on a stick!

BEHIND THIS BITE
In my 12-plus years living in New York City I devoured a lot of street cart food – it’s as convenient as fast food is in the Midwest. My first apartment was near the 36th Ave. Stop on the N train in Astoria. Right underneath the stop (the N train is elevated in Queens) was a small Irish bar named McGrath's that was in business for more than 80 years, but closed in the summer of 2001.

I used to stop there for beers on my way home before it closed its doors. Every Friday and Saturday night an Eastern European man would set up his Kabob cart just outside the bar near the stairs to the train. He didn’t have much variety. Just an all-beef kabob with a piece of toasted bread, which really hit the spot after a few cold ones.

I’ll never forget being at McGraths one night when I noticed one of the regular patrons facing the corner and crunched over. She was a rather large lady and her body language seem to indicate something was wrong and she didn't want anyone to notice. I approached her to see if everything was ok, when she turned from her hidden spot in the corner I noticed she was chewing a mouthful of something with an empty kabob stick in one hand and a toasted piece of bread in the other. She nodded to indicate everything was ok and seemed a little embarrassed.

I had interrupted her clandestine swaray with a beef kabob from the snack peddler beneath the train stop!

I felt as though I had accidentally walked in on a roomate having sex — Which is comparable to the rush one would get from a grilled beef kabob after a few pints of beer near the 36th street stop in Astoria.

Assemble and grill
Alternately place onion, peppers, mushroom and steak on skewers. Brush with teriyaki sauce, season with salt and pepper to taste. Let marinate 20 minutes then cook to desired doneness on a prepared grill. Rest 10 minutes, then serve.
Posted by behindthebites@gmail.com at 3:34 PM