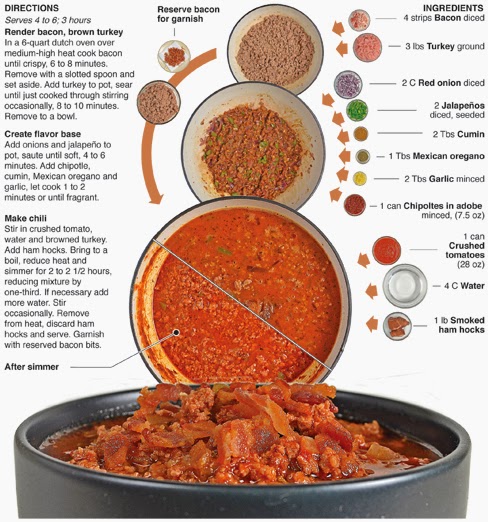 For the past three Thanksgivings, I have cooked a turkey or turkey breast and traditional sides with my culinary twist applied to publish here. This year, I’m doing something different for the more progressive culinary crowd.

For a main course I have created a smoky chipotle turkey chili!

To enhance the smokiness of the dish I start with diced bacon so that the flavorful renderings can be used to saute the aromatics. I removed the bacon after its cooked and use it as a garnish for the final dish.

Turkey is the star but it really just acts as a canvas for the flavors to stand upon in this recipe. I use a whole can of chipotle chiles in adobe, that I deseed and mince, with cumin and Mexican oregano for the main spice, but to enhance the smoke even further and compliment the chipotle, I add smoked ham hocks to the pot. After a long simmer that reduces the liquid and melds the flavors  – a silky, smoky and meaty chili emerges that can stand tall in any Thanksgiving spread.

I had to convert half of my dinning room into a kitchen work space and food photography studio to do it. I’ve also had to get used to a new place of employment and just move into a new home in general. In the process, I confirmed what I had thought five years ago.

Whether it’s across the street or across the country. Having to physically move every thing you own form couches to paper clips is a massive pain in the ass. But, it’s also a new beginning once all of the boxes are in place, which for me has been pretty exciting.

I had to down size significantly when I left New York, so there has been lots of stuff that had to be built or purchased in general just to have a spot to come home to watch TV without a mess in front of me. Now, I can finally do that as well as create a post like this.

I’m happy to have the blogging stuff checked off the list, but what I’m looking forward to most as part of the move is unpacking and displaying my ridiculous Star Wars collection. I just have to build the shelving to house the collectibles as well as the 80 some boxes of books that fill half my bed room!

Yep. I’m a pack rat. Which makes moving even worse!

Render bacon, brown turkey
In a 6-quart dutch oven over medium-high heat cook bacon until crispy, 6 to 8 minutes. Remove with a slotted spoon and set aside. Add turkey to pot, sear until just cooked through stirring occasionally, 8 to 10 minutes. Remove to a bowl.

Create flavor base
Add onions and jalapeño to pot, saute until soft, 4 to 6 minutes. Add chipotle, cumin, Mexican oregano and garlic, let cook 1 to 2 minutes or until fragrant.

YAY! Welcome back - I look forward to future blogs from you. Glad to see your move is complete.