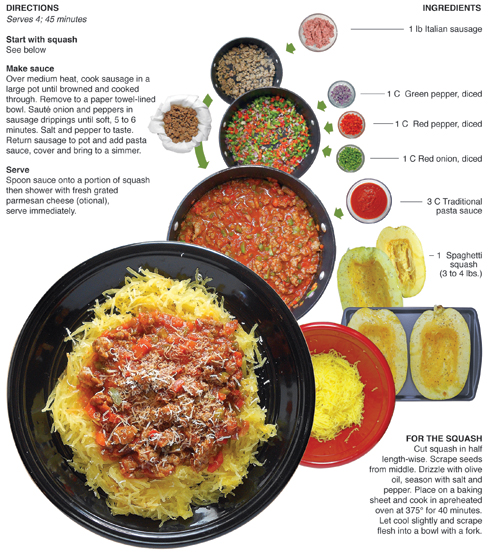 Squash has been dated as far back as 7,000 B.C. in parts of Mexico and South America. According to The Oxford Companion to American Food and Drink, explorers from Europe originally thought squash were melons and were delighted to find them everywhere they went in the new world.

Squash is one of many examples of a modern food staple discovered in the Americas. I'm starting to think that the diet of most Europeans before they began exploring consisted of grass, tree bark and the flesh of what ever animal they weren't currently using as transportation.

Here I used spaghetti squash, a winter variety, as a substitute for — you guessed it — spaghetti. It's so much lighter than pasta and has a delicate flavor. In fact, I prefer spaghetti squash over actual spaghetti.

The sauce is a traditional store bought sauce with some amplifiers. Kind of like a factory car turned into a hot rod. Fresh sausage, onion and green pepper give it a flavor boast that is sure to please.

FOR THE SQUASH
Cut squash in half length-wise. Scrape seeds from middle. Drizzle with olive oil, season with salt and pepper. Place on a baking sheet and cook in apreheated oven at 375° for 40 minutes. Let cool slightly and scrape flesh into a bowl with a fork.

FOR THE SAUCE
Over medium heat, cook sausage in a large pot until browned and cooked through. Remove to a paper towel-lined bowl. Sauté onion and peppers in sausage drippings until soft, 5 to 6 minutes. Salt and pepper to taste. Return sausage to pot and add pasta sauce, cover and bring to a simmer

Spoon sauce onto a portion of squash then shower with fresh grated parmesan cheese (otional),
serve immediately.
Posted by behindthebites@gmail.com

Beautiful how-to. I used to consider spaghetti squash as a substitute for pasta and I suppose it can be. But it really deserves to be its own thing. Your graphic/recipe explain why. Delicious.