Chicken Tenders with Peppers and Onions 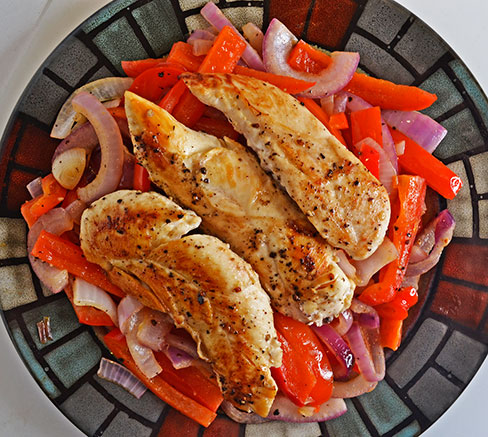 This plate is a perfect example of how I have been preparing diners with less carbs in mind. In the past, I would have served this — sauted onions, peppers and chicken — over a heaping mound of white rice. Afterword, I would have needed a nap and then a wheelchair to get around in until I had digested some of it.

I prepared:
6 chicken tenders
1/2 of a sliced medium onion
1 sliced red bell pepper
All cooked over medium heat in a little olive oil with salt and pepper to taste. (I ate half for the meal, and saved the other half for leftovers.) I also ate a whole avocado as an added bonus.

I don't know the exact carb count but it's pretty low. I think around 20 grams. I'm still pretty new at the carb counting game but that is my best estimate.
Low carb or not, sauteed onions and red peppers are a favorite of mine. The sweetness that comes out during a 6 to 10 minutes saute in a little olive oil with salt and pepper really hits the spot. They were the star here, the chicken was just filler, especially now that the ultimate filler — rice — had been left out.

This looks amazing! I will be making this and putting some sauteed spinach with it, just to add a bit of greens. I bet this would also be really great with kale as a "shell" and make tacos with it. Yumm!!

I love the idea of using kale to create a wrap out of this! I must try myself!