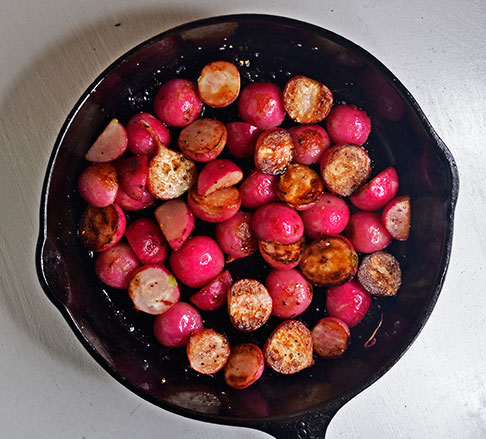 I have had roasted radishes many times and really enjoyed them. They are a close substitute for a roasted potato. This is the first time I tried to saute radishes. I did it simple — with olive oil, salt and pepper in a cast iron skillet over medium heat. 10 to 15 min., Tossing occasionally.

They turned out ok. Edible, but nothing special.

They were a little inconsistent as far as doneness. Some were softer than others, and there was a peculiar taste to them - almost earthy in a way. Not sure if it was the radishes or the well-seasoned pan I cooked them in. It wasn't a bad taste, just something a little unexpected. This will need some work before I sing the praises of a radish-potato substitute recipe, but it was fun to try something new.

I wanted to post this because it's my first attempt at intentionally creating a low-carb side dish. As a way of trying to eat more healthy, I have cut back on the bread, potato, rice and pasta. (And sugary stuff in general). Not fully eliminating them, but have become conscience of carbs and want to limit my intake.

According to a quick (but credible) web search:

A 2 oz. serving of red potatoes has 10 grams of carbs.