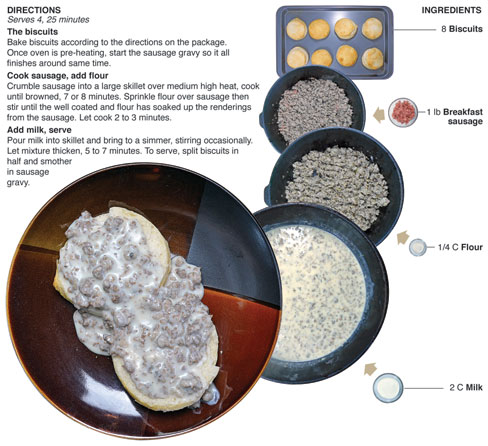 When I was younger, one of my favorite things to do was get a late night order of biscuits and gravy after being out with friends. I would rip into a plate of this stick-to-your-ribs dish like a celebrity who just gave up on Jenny Craig.

Biscuits and gravy are served throughout the Midwest but it is for the most part considered a southern dish. It was a favorite on southern plantations because it was easy to make and provided a substantial breakfast before a long day of work.

I have to admit that the best biscuits and gravy I have ever eaten was when I spent the weekend in Chattanooga, Tennessee. I ate breakfast at a small diner with hand-made wooden benches. Not only was it the sausage gravy amazing – the biscuits were moist and creamy and unlike any baked good I have ever devoured.

For this recipe, I make my own version of my favorite breakfast. They're not as good as what I found in Chattanooga, but neither is 99.9 percent of the biscuits and gravy found on this planet.

I use store bought biscuit dough, but the gravy is made from scratch and definitely a great start to any day. 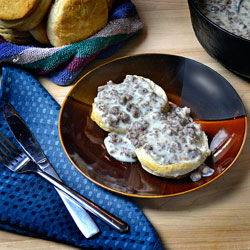 BEHIND THIS BITE
This is one of the first recipes I made for my food column. It didn't appear here because I made it before I created Behind the Bites. I decided to make it again and shoot it with better knowledge of quality photography, food styling and culinary knowledge in general. When I originally created this, I was using a hand held Canon PowerShot and halogen flood-lights to illuminate the food. It was literally a Wal-mart purchased photography studio.

I have since discovered tripods, lights that replicate the sun’s wavelength, diffusers, reflectors and most important – DSLR cameras. I’m still a photo novice but I do believe my skills have improved immensely.

The improvement mysteriously coincides with about $1,000 worth of equipment. Whether it’s better equipment or better photography skills, I am much happier with my photography now than I was when I created this recipe the first time.

Below you’ll find a side-by-side comparison – judge for yourself. I think that the photography is better, and I have also refined the layout template as well. What a difference a year-and-a-half makes.

NOTE: The actual recipe has also been tweaked, which was not only better for flavor but it lent itself to a more appetizing photograph of a plate of biscuits and gravy.

Justin, thanks for joining the breakfast fun over at Carole's Chatter. Cheers