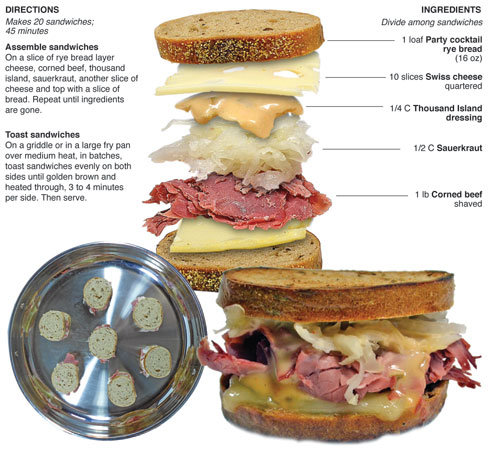 In Ireland, St. Patrick’s Day is a religious holiday. The tradition was brought to America with mass immigrations of the Irish in the 19th century. Over the last 150 years, the American version of the celebration has moved from the church to the streets – complete with leprechauns guarding pots of gold, green beer and corned beef and cabbage – all St. Patrick’s Day traditions part of the American version of the holiday.

In 19th century Ireland, corned beef was rarely eaten, and was produced mainly for export to England. It is believed that Irish immigrants in the U.S. started eating it on St. Patrick’s Day as a symbol of their newly found status and it eventually evolved into the traditional holiday dish. Corned beef and cabbage is to Ireland like Taco Bell is to Mexico – more American than authentic cuisine.

For this recipe, I use corned beef and fermented cabbage, otherwise known as sauerkraut, in a mini reuben sandwich – The perfect snack for an American St. Patrick’s Day party or celebration. 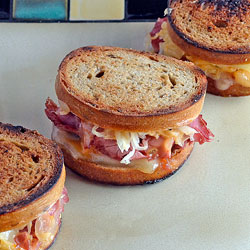 BEHIND THIS BITE
In 1956, Fern Snider, a cook at the Blackstone Hotel in Omaha, Nebraska, won the first National Sandwich Idea Contest with the reuben sandwich, giving it national recognition. Today, reubens can be found on menus all across the U.S., and is truly a great American sandwich. I put it in the same category as the Big Mac and Philly Cheese Steak.

Arby's has a Reuben as a temporary menu item that I tried last Friday night. It was good, except I got the "Super Reuben" which included sliced turkey as well as corned beef. This took away from the overall experience because when I order a reuben – I'm expecting a reuben. I should have just gotten the regular version.

After I left Arby's I went directly to Meijer to explore the grocery section hoping to find inspiration for my weekly food column that was due four days later. I was there a total of ten minutes when I came across a display of cocktail party breads. At first I thought "bruschetta." As I looked at the various packages of different breads I noticed rye. That is when it hit me. I had to take these mini slices of rye bread and make me some mini reubens!

It's lots of work making 20 small sandwiches, but the end result was a tasty little snack.

It was a complete coincidence that corned beef and sauerkraut (fermented cabbage) are the center piece for this treat. It's the perfect recipe for a St. Patrick's Day column and made for an easy introduction. Try these this weekend - They're the ultimate snack to wash down with green beer!