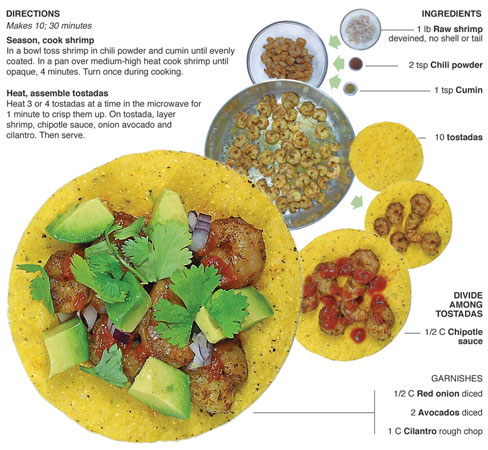 I have learned to accept that I can’t eat as much yummy seafood here in Indiana as I did when I lived in New York City. It’s just a matter of being landlocked. Not that I can’t get quality seafood here, it’s just that it comes a steep price.

Gone are the days of visiting the fish monger across the street and taking home a bounty that was pulled from the sea just hours before.

One seafood item that I get good results from consistently in Indiana is frozen raw shrimp. It’s cleaned and flash frozen on the boat just after being pulled from the sea and usually keeps well as long as it remains frozen solid until it is thawed just before cooking.

I love shrimp, but it is delicate and must be cooked just right. I tend to lean on the side of rare with it. My philosophy with shrimp is don't be afraid to pull it from the heat to soon, kind of the opposite of chicken. Overcooked shrimp is rubbery and just plain nasty, where as shrimp cooked barely through is juicy and succulent.

For the tostadas here I season the shrimp similar to how I would season ground beef for nachos or tacos, with chili powder and cumin to give it that south of the border flavor.

I also use a sauce on these tacos that’s worth mentioning. It’s simply named Chipotle Sauce and it’s made by Empacadora San Marcos. The only major grocer that carries it in Fort Wayne is Meijer. It’s tomato based, and because of the chipotle, or smoked jalapeño, it has great kick with a smoky flavor. It reminds me of the red sauce I used get at taco stands in Queens. I always keep a can or two in the pantry so I can have quick authentic Mexican flavor when I need it. 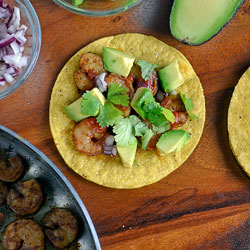 BEHIND THIS BITE
When I sat down to create the graphic recipe I was mortified to find out I had neglected to photograph the onion step for building the tostada. I couldn’t believe it! Because of this, the recipe was ruled out for print. You’ll notice that I overcame the blunder by using one photograph to illustrate all the garnishes. Usually each would get its own photograph. It works just fine that way but I have established a style for illustrating these recipes. Although every single step and prepped ingredient isn’t always necessary to photograph, I try to remain consistent and include everything. I believe doing that is what makes these recipes stand out and it does help to simplify the cooking process. I’m the only one in the world that would notice that, but it was the primary reason why this recipe will only appear here on the blog and not in my newspaper column.

hey yall shld post recioes for babies/kids once in a while !!!!! BTW avacados were the first food my babies ate an they LOVED them :)