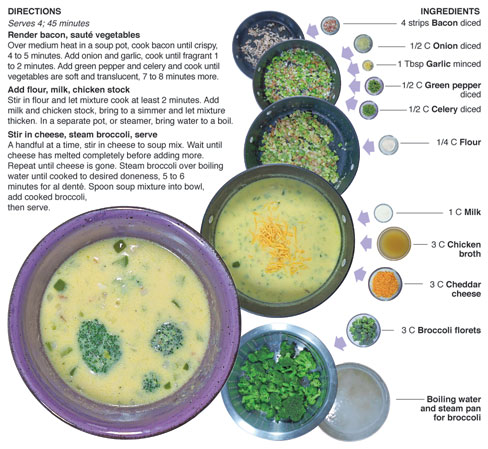 This is the 93rd weekly food column I have created for print. My Aunt has clipped everyone before it from the paper and saved it in a scrap book. I like to bring her samples to try before she gets the issue in the mail on Thursday, that way she has the memory of the taste of the dish while she reads about it. She has been sick for a while, and I thought I would make a soup for her to try that would also be good to share here.

For this recipe, I make a broccoli and cheddar cheese soup. The secret is to cook the broccoli separately and sprinkle it in when the soup is served. That way it’s not overcooked and mushy when eaten. I purchased the ingredients early last week and had intended to make it for the weekend and share it with my Aunt on Easter.

Sadly, the battle she has been fighting with cancer since July became to much for her. She passed away peacefully last Friday evening with family by her side. She didn’t get to taste the soup, or read about it in the paper, but this is for her – my biggest fan, my friend, my Aunt Roxy. 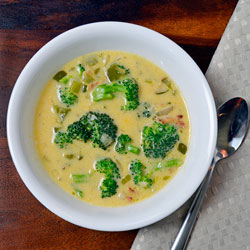 BEHIND THIS BITE
It has been a tough couple weeks for the family and I. We are close-knit and loosing someone as important as Aunt Roxy has been a big ordeal.

When I started my food column I did a lot of the cooking at our private family campground which is on Aunt Roxy and Uncle Denny's property. I was there all the time during my first few month after moving back to the area in May of 2010. For me, it was the summer of camping and cooking. Aunt Roxy loved the campground too and we spent a lot of time there together that summer. She got to sample most of my creations and would offer honest assessments of their quality. We had always been close but our bond as family – and as friends – grew much stronger during those first months back in Churubusco.

Aunt Roxy was diagnosed with lung cancer last summer so it was a long fight for her. It was the first time I have experienced a terminal illness up close. It was like she aged 40 years in 9 months. The disease effected her entire body not just her lungs. Through it all she remained stoic. At first, it was hard for her to accept but eventually she took hold of it and lived each day as fully as she could.

In many ways she was a second mother to me. She visited New York more than anyone else except my own mom in the 12 years I lived there. In the years when all you can do is disagree with your parents, I went to Aunt Roxy often – as did my sister. She was the most non-judgmental person I have ever known and a valued source of wisdom that only age can provide.

She is no longer here in the flesh but her influence is alive and well – in all of us that loved her.

This post was supposed to be about broccoli and cheddar soup but through the course of living life it became a post about the person the soup was intended for, a person I loved unconditionally, a person I will miss dearly.

See you on the other side Aunt Rox.

Eat well, cook often ... and don’t be afraid to love.
Posted by behindthebites@gmail.com

I am so sorry for your loss. My thoughts and prayers are with you and your family.

Firstly, may I just say how sorry I am to hear of your loss. Cancer is nasty, I lost my mum to lung cancer and I was diagnosed with colon cancer in 2010. It seems to be everywhere.

You are welcome to join in my monthly food blogger event THE SOUP KITCHEN, here all bloggers are welcome, hope to see you participate soon. Different theme each month.