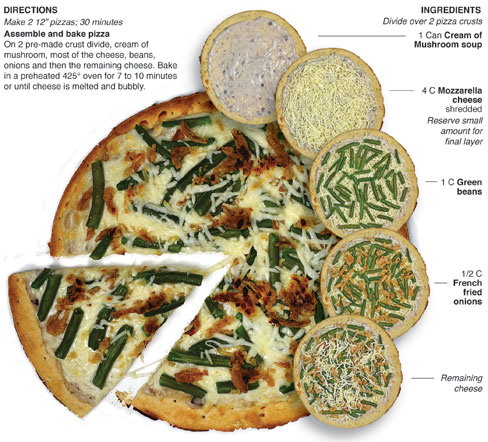 When I told my Mom about making this pizza she rolled her eyes and gave me a smirk. I couldn’t help but agree. Green bean casserole on a pizza. Sounds crazy, but it was an easy experiment and I had a bowl of cooked green beans left over.

After documenting my Cajun Green Beans recipe I realized I had not taken a photograph of the green beans after they were blanched. I cooked another pound a couple days later to get the shot, which left me with a batch of beans. I knew I was going to have them which got my brain working.

My favorite green bean dish is green bean casserole. I have made it several times (Once completely from scratch) and thought that I could do something inspired by the casserole. That’s when a pizza came to mind. I thought it was worth a try.

The end result was awesome – Pizza at it’s gourmet best! I left some for Mom and when I talked to her later she agreed. We were both totally surprised. The onions and beans compliment each other and the mushroom soup mixes with the cheese for an incredible creaminess not found on your average pizza. 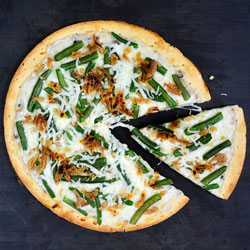 BEHIND THIS BITE
Green bean casserole is something I look forward to every year around Thanksgiving. Four or five years ago I decided to make it completely from scratch - Fried onions and all - after watching Alton Brown do it on an episode of good eats.

The entire recipe ended up being disaster.

I started by burning the onions, because the recipe called for them to be crisped up in the oven rather than fried and I left them in to long. After that, the cream of mushroom soup never thickened properly which left me with a thin milky sauce coating the beans and burnt onions on top. It was a gallant effort that just never came together.

I think that this year I might try to make it again from scratch, but I’ll do it with my own recipes. I’ve made cream of mushroom soup as well as french fried onion here at Behind the Bites. I may break them out and combined them into a classic turkey day treat.

Sounds deelish! Thanks for getting my creative & salivary juices flowing.
Might try this as a burrito, wrap or on puff pastry.