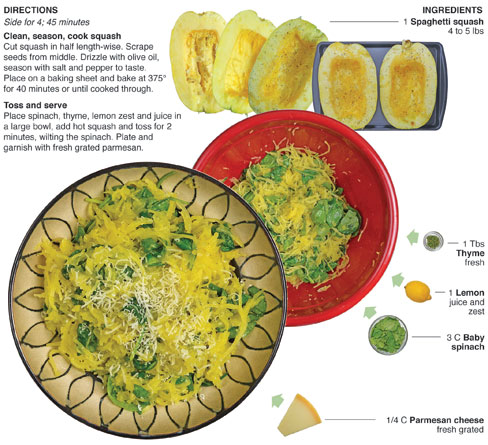 Fall has returned and with it the multiple varieties of winter squash. Originating in the Western hemisphere, there is evidence of squash being consumed in Mexico more than 7,000 years ago. Unlike the summer variety, winter squash has inedible skin and tough flesh that needs to be cooked for a long time to be eaten. They are also larger and heavier and impossible to chuck at passing revelers on a fall hey ride with any accuracy.

Generally, I am not a big fan of winter squash but one variety stands out: Spaghetti squash. I love to use it as a replacement for the obvious – spaghetti pasta. It has a nice mild flavor and is much lighter in the belly.

For this recipe, I combine spaghetti squash with spinach and accent it with lemon and thyme. Residual heat from the squash right out of the oven is used to wilt and cook the spinach. The fresh lemon and thyme combined to give the dish a signature taste. It’s surprisingly light and flavorful and a great side for almost any meal. 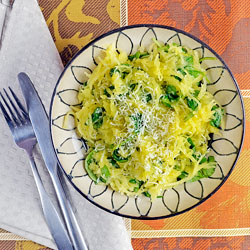 BEHIND THIS BITE
Years ago I made a recipe similar to this that I found in Cuisine at Home magazine. The original dish called for angel hair pasta and I thought spaghetti squash would be a great substitute. The squash actually enhanced the flavor. It’s much lighter and has a subtle garlic-like taste and compliments the flavors surrounding it. I was really pleased with the dish overall.

It seems that I make a lot of heavy dishes, so it was nice to make something that would appeal to people who are dieting or more apt to eat lighter. Spaghetti squash is a fantastic substitute for spaghetti pasta. This is the second dish I have created for Behind the Bites that I have done it and both were a success. The first time the swap was for spaghetti and meatballs, which feature a sauce and protein that are really the star of the show. In this dish the squash is much more prominent and it stood up well next to the lemon and thyme.

Once again, I'm impressed with the spaghetti variety of squash. I'm really not a fan of winter squash in general. I think it’s bland and has to be cooked so long that it looses it's texture. Spaghetti squash is definitely the exception. I look forward to working with it again.

Clean, season, cook squash
Cut squash in half length-wise. Scrape seeds from middle. Drizzle with olive oil, season with salt and pepper to taste. Place on a baking sheet and bake at 375° for 40 minutes or until cooked through.

This was delicious and very light. Thank you so much for posting it!