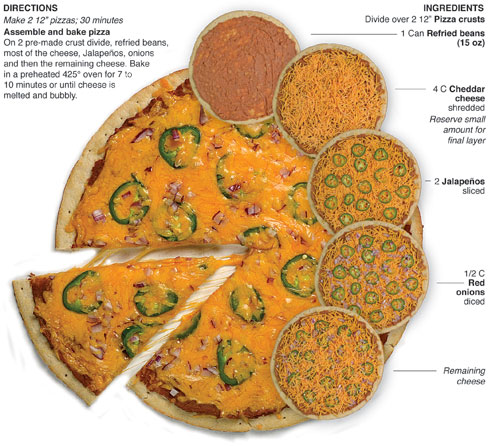 I wanted to make an exotic pizza for Football on Sunday. While I was at the grocery store I decided it would be fun to take a Mexican route. I headed to the meat case to pick up some ground beef. I usually start a pizza with the meat then go from there. While on my way to pick out the beef I had an epiphany - why not leave out the meat. I couldn’t believe a thought like that went through my head.

Just the day before I had served a vegan chili at Fort Wayne Chilifest. I had been asked to make the chili vegan by Fort Wayne Trails, who sponsored the booth. I never thought I would serve up such a dish, but I worked hard on it, and it turned out delicious. Now I was contemplating a gourmet pizza without any meat? What the hell had gotten into me!

Whatever it was I went with it.

I decided that refried beans would be a great base to build on. I added fresh sliced jalapeño and red onion, then it’s all held together with cheddar cheese. The end result was a great slice of pizza to enjoy while watching the National Football League. I left the seeds and ribs in the jalapeño which gave it some kick.

I think I’m going to try and do more recipe that require no meat - Just to gain more appeal with my cooking in general. By no means am I going to get nutty and go vegetarian, but I think it is a nice challenge to come up with a few recipes that appeal to the no-meat crowd. 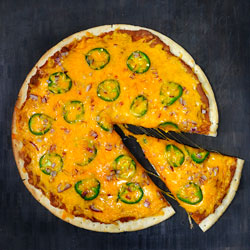 BEHIND THIS BITE
In my last post I mention working with the Director of Fort Wayne Trails at Chilifest. While I was serving up chili and she was promoting the next Trails event, she mentioned to me that she had not eaten meat for 20 years. She said she’s not super hard core, sometimes she’ll eat milk based stuff or food with cheese but she has abstained from meat for 2 decades.

To me, that is impressive because I love protein, especially after being cooked over charcoal. I couldn’t imagine life without it. That’s when it kind of hit me. She does it for her health as a commitment. She doesn’t have too, but, it’s a choice for her health. That takes some guts.

I could see refraining from meat every so often for the sake of health, but to never eat meat again, that’s a real tour-de-force. I won’t be going that route anytime in the near future, but a few recipes here at Behind the Bites that vegetarians or even vegans could get into is a good thing. This pizza has cheese so it’s not vegan - no cheese on a pizza is not a pizza in my book - but it is a pizza that a vegetarian can enjoy. Now that I have made my declaration to make a few vegetarian recipes, I need to go cook the ribeye I have in the fridge for lunch.

Assemble and bake pizza
On 2 pre-made crust divide, refried beans, most of the cheese, Jalapeños, onions and then the remaining cheese. Bake in a preheated 425° oven for 7 to 10 minutes or until cheese is melted and bubbly.
Posted by behindthebites@gmail.com

Somehow, I feel those jalapeños aren't enough. Some cayenne pepper on top of that should give it that nice scorching flavor.