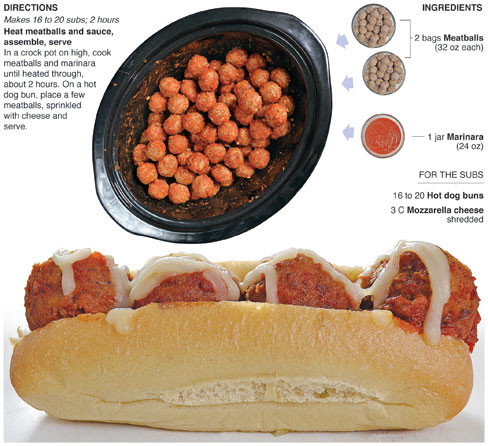 This is the perfect snack for a party. It makes 16 to 20 meatball subs and takes only minutes to get ready and two hours to warm in a slow cooker. Which allows time to prep for the party or have a few drinks to take off the edge before guests arrive.

I originally made this for a meeting at St. John Bosco Catholic Church that I attended last summer. I didn’t think much of it at the time, but a few months passed and another guy in the group made it to share at a similar gathering I attended. Once that happened, I figured it was worth creating a post for the recipe here.

It really is simple, it requires opening a couple bags, a jar and turning the crock pot on - if that’s to much then you probably have worse things to worry about than feeding others. I don’t generally promote stuff from the freezer isle without serious modification, but I have to admit the frozen Italian-style meatballs from Walmart are really tasty. They don’t compare to homemade, but they could give Subway a run for their money and I think that is why I liked these simple sandwiches so much. 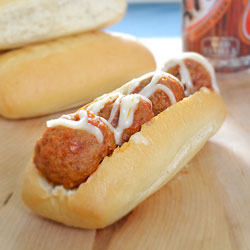 BEHIND THIS BITE
When I was 19 years-old I went for freshmen orientation at Ball State University. I had been accepted to the school but had never set foot on campus. I went to tour the campus and sign up for classes. During my lunch break they let us roam the village - a little spot near campus for college kids to get food, go for drinks and get everyday supplies.

It’s a booming spot when school is in session. I decided to eat at the only familiar restaurant I recognized - Subway. I went there rather than the Flying Tomato - a pizza joint down the street. (which burned down a couple years later) I ordered a 6-inch meatball sub and, like every other meatball sub I have ordered from subway, it fell apart. This one in particular made a mess of my shirt, so everyone else at orientation knew what I had eaten for lunch just by looking at me clothes.

I don’t know why, but other than a few of the buildings I saw, that sandwich is what I remember most about that day. Ball State would change the course of my life and my first real memory is a messy sandwich for lunch. I should probably count my blessings though, because it could probably be much worse. 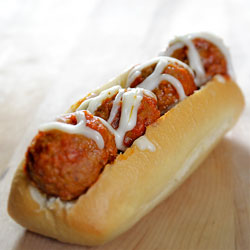 Heat meatballs and sauce, assemble, serve
In a crock pot on high, cook meatballs and marinara until heated through, about 2 hours. On a hot dog bun, place a few meatballs, sprinkle with cheese and serve.
Posted by behindthebites@gmail.com

WHAT KIND OF MARINARA

Any store-bought marinara will work.