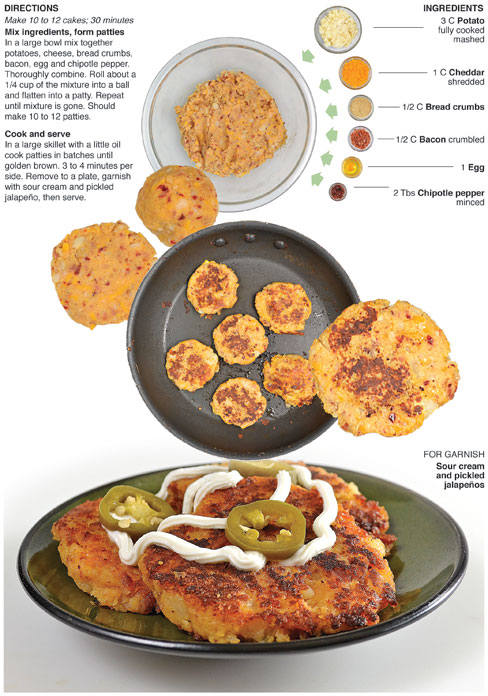 For my last post I created Nacho Potato Skins, which left me with 3 cups of cooked potato that I could either throw away or put to good use. Rather than throw it out, this is what I made – Chipotle cheddar potato cakes! They were fun to make and tasty to eat. I got dirty and used my fingers to make the patties for this one. It was just like mixing together a meat loaf, I could’ve used a spoon but it’s easier and more thorough to use the fingers and just get messy.

The potato is really just a canvas used to hold and present the other flavors. I decided to use my holy trinity: cheddar-bacon-chipotle, or creamy-smoky-spicy. I love that flavor combo. I bet I ate 7 or 8 of these myself, enough for the spice of the chipotle to give me heartburn and for me, That’s a lot! On second thought the pickled jalapenos as garnish may have contributed to that also. Hard to tell, one thing’s for sure though – I ate a bunch of these. 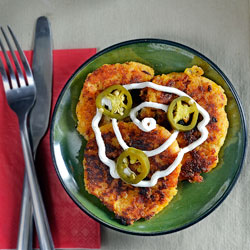 It took me a batch in the skillet to get these right. At first I had too much oil in the pan and I wasn’t getting the crust, so I had to change course. That’s when I cleaned the skillet and used just enough oil so the cakes wouldn't stick, and I left them alone until they were sizzling. It took a little patience and a change of direction, but I got the crispy skin to compliment the creamy and cheesy center.

I ate them with sour cream and pickled jalapeno but these could have been put in a sandwich just as easy. Any number of ingredients and flavors could be used to make them and I highly recommend trying something like this when there is left over baked or mashed potato. Actually, I’d be willing to cook some potatoes to just make more cakes like these again. 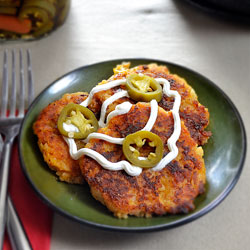 Mix ingredients, form patties
In a large bowl mix together potatoes, cheese, bread crumbs, bacon, egg and chipotle pepper. Thoroughly combine. Roll about a 1/4 cup of the mixture into a ball and flatten into a patty. Repeat until mixture is gone. Should make 10 to 12 patties.

Cook and serve
In a large skillet with a little oil cook patties in batches until golden brown. 3 to 4 minutes per side. Remove to a plate, garnish with sour cream and pickled jalapeño, then serve.
Posted by behindthebites@gmail.com at 12:10 PM